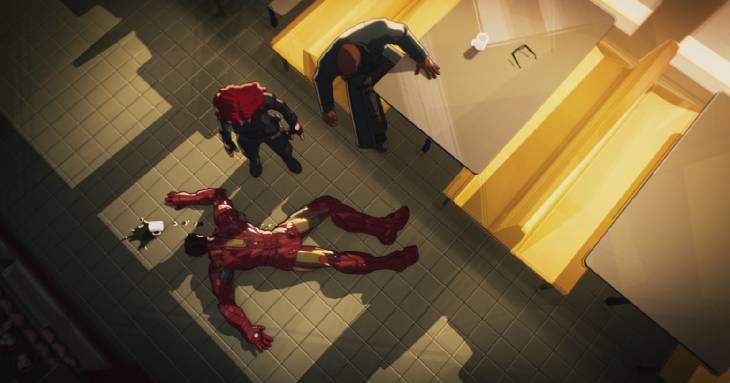 This episode focuses on the possibility of The Avengers being killed off.

WARNING: SPOILERS AHOY for “What If…?” episode 3 “What If the World Lost Its Mightiest Heroes?”

The episode takes place during the events of Iron Man 2. However, instead of forming the Avengers team, Tony dies after his body rejects an antidote. Natasha tracks down Betty Banner, who discovers that the antidote wasn’t used. There was actually a projectile in the syringe.

Meanwhile, in New Mexico, Agent Coulson finds Thor’s hammer. In this version though, Hawkeye apparently kills a mortal Thor with his arrow before dying himself in captivity. This means that when Loki arrives with The Destroyer, there are no gods or superheroes to stop them. Fury manages to strike a deal with Loki to find Thor’s killer.

General Ross arrives with a squad of soldiers, presumably to apprehend Natasha. Bruce Banner changes into The Hulk, but shortly after Hulking out he (ewwww…) puffs up and explodes. Little bits of Hulk probably dripping everywhere.

Later that night, Natasha notices that records have been accessed by a woman who supposedly died two years prior. She is then attacked by an unknown assailant. She manages to send a voicemail to Fury stating “It’s all about Hope…”. Naturally, this means Hope Van Dyne, the daughter of Hank Pym. Fury decides to meet with Loki.

Later, Fury meets Hank at Hope’s grave. It turns out that in this reality, Hope perished while on a mission for SHIELD. Hank admits to murdering all of the would-be Avengers as revenge for his daughter’s death. However, when he tried to finish the job with Fury, he finds that Fury is able to match him move for move. It turns out that Fury was not Fury at all, but a shapeshifted Loki.

In the epilogue, Loki winds up becoming ruler of the world, and Fury still manages to find Steve Rogers encased in ice. The last scene is Captain Marvel asking Fury where the fight is.

This episode just wasn’t as strong as the others, but it was still pretty darn good. Part of the joy was the reuniting of Samuel L. Jackson as Fury and Clark Gregg as Coulson. Lake Bell sounded so much like Scarlett Johansson you might have thought she was the real thing. And even though he only had one or two lines, Mick Wingert’s RDJ impression is spot on. This series so far has yet to disappoint.