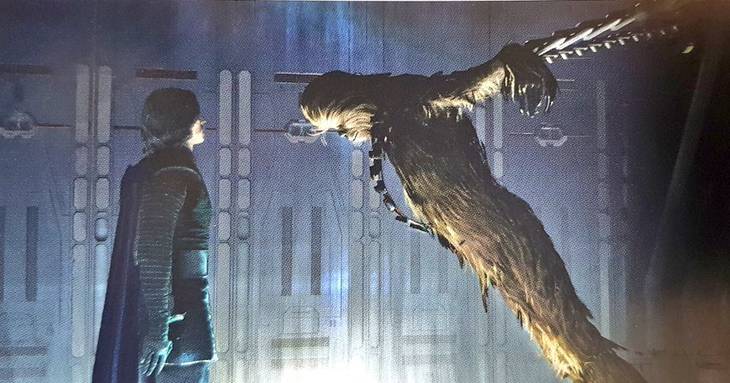 The novelization of The Rise Of Skywalker has finally hit bookshelves a full three months after the release of the film. As expected, several scenes from the film are expanded upon and include explanations for things that were not made clear in the movie itself.

OBLIGATORY SPOILER WARNING: If you have not seen The Rise Of Skywalker movie or read this book, you may want to stop now to avoid any unwanted spoilers. Proceed at your own risk.

One such scene happens onboard Kylo Ren’s Star Destroyer, where the Supreme Leader tries to interrogate Chewbacca after kidnapping him from the planet Pasaana. Using a similar Force tactic seen in The Force Awakens on Poe Dameron, Kylo reaches into Chewbacca’s mind to extract information. However, unlike Poe, Chewie was ready for this.

Instead of finding the secrets he wanted, Kylo saw visions of Chewbacca adventuring with a young Han Solo. Chewie attending Han and Leia’s wedding. Chewie carrying Ben Solo when he was a child. Chewie helping teach Ben how to fight. All sorts of happy memories that countered the Dark Side rage within Kylo. Since The Dark Side feeds off anger and fear, emotions such as love and happiness drain its power.

It’s a real testament to Chewie’s resolve, and it’s a scene that longtime fans of the wookiee will likely wish made it to the screen. It also shows the change of heart Chewie has gone through since The Force Awakens. Of course, Chewie instinctively shot Kylo Ren after seeing him murder Han in cold blood.

The Rise Of Skywalker novelization is now available in hardback print and in audio format.