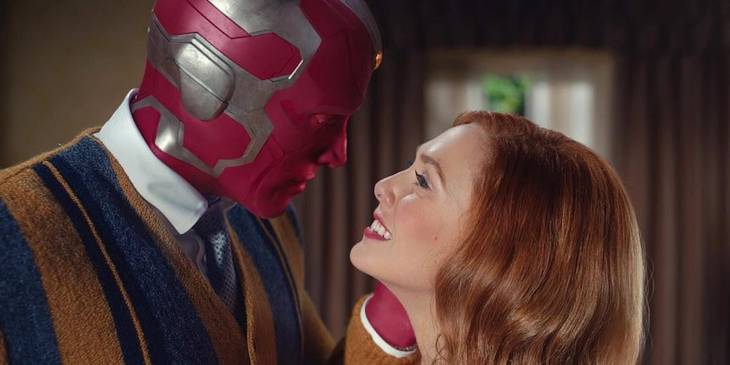 The latest MCU entry, Wandavision, premiered last week with a pair of episodes done up like classic sitcoms. This week, the show switched to color and jumped forward a decade. If the previous weeks could be compared to the 50’s and 60’s classics such as I Love Lucy and Bewitched, this episode was done up more like The Brady Bunch and The Partridge Family.

WARNING: Major Spoilers within. Do not proceed is you wish to stay spoiler-free.

The main storyline for this episode is Wanda’s pregnancy. However, this was no ordinary pregnancy. Wanda’s child is growing at a super-fast rate. The baby comes to term in the span of a couple of days instead of the usual nine months. Meanwhile, Vision begins to notice odd behavior. His neighbor is seen cutting his wall with gardening tools.

Wanda gives birth at the house, aided by another neighbor, Geraldine. She winds up giving birth to twins, Tommy and Billy. Long time fans will know that Wanda had two children in the comics named Thomas and William. Fans may also notice that “Geraldine” is portrayed by Teyonah Parris. This likely means she is actually Monica Rambeau, who also took the name Captain Marvel in the comics during the 70s and 80s.

While making small talk, Wanda mentions that she had a brother Pietro. Geraldine responds by saying he was killed by Ultron. The final moments of the story show Geraldine getting hurled back into presumably the “real world” where she is quickly surrounded by military personnel to the tune of “Daydream Believer” by The Monkees.

Taking the sitcom approach was risky, but it seems to have worked. Overall feedback has been positive. However, there is a possibility that four episodes may be too long for the audience to keep interested. We know there’s at least one more episode that will have an 80s vibe. My hunch has always been that Wanda and Vision will break out of this alternate reality before the last few episodes. Knowing Marvel, the placement of the classic Monkees song “Daydream Believer” was a major hint that Wanda is the one behind this reality, and SWORD are actually the ones trying to break in. Either way, the next episode will likely shift gears into the second act.