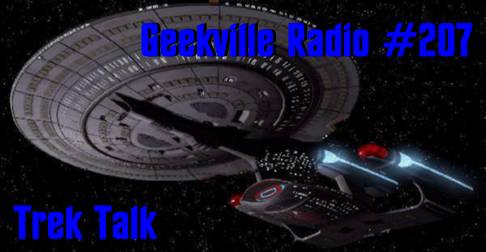 If you’re a “trekkie” or “trekker”, you’ve come to the right place! This episode of Geekville Radio is devoted almost entirely to Star Trek

In a move that has been speculated for some time, Sir Patrick Stewart officially announced his return to the Star Trek franchise as Jean-Luc Picard. While the details are not made yet, Picard’s presence will be on the as yet unnamed second Trek series slated for CBS All-Access. Seth and special guest Will give some fun speculation on what Picard might be doing.

Also in the Trek World, up to four series are in the works for the CBS streaming service.

Not to be outdone by TV, current Spock Zachary Quinto gives an update on the rumored Quentin Tarantino helmed feature film. Given Tarantino’s style, it’s almost assuredly an R-Rated movie. If that is the case, it will mark the first time Star Trek has ventured into R-Rated territory. The big question looms: Is Tarantino a fit for Star Trek?

In late breaking news, veteran Trek actor Brent Spiner has been announced as part of the cast for Supergirl’s fourth season. Plus, Orange Is The New Black’s Ruby Rose has been cast as the previously announced Batwoman.