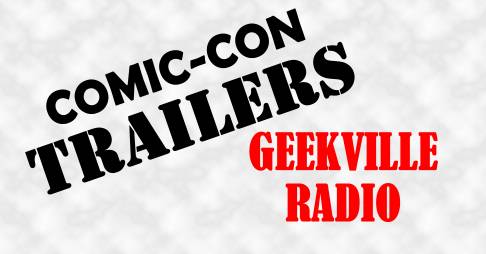 One of the many highlights of San Diego Comic Con is the trailers that debut for all the superhero and sci-fi movies. This year was no exception. Join Seth and Crazy Train as the discuss their favorite trailers from the con. All the trailers are listed in the order they’re discussed. Watch the trailers and follow along!

SHAZAM: A lot of comedy, the origin is in the trailer. Did Zachary Levi watch Tom Hanks in Big for inspiration?

GODZILLA, KING OF THE MONSTERS: Millie Bobby Brown’s feature film debut. Mothra, Rodan, King Ghidorah… Will we have Kong? And Seth is calling it, “Humanity is the real monster”.

GLASS: The shared universe of Unbreakable and Split

ARROW Season 7: Ollie vs. Everybody in jail. Who is the new archer? Vinnie Jones is back!

SUPERGIRL Season 4: Another Anti-Alien Season. Is that Russian Kara in the spacesuit? CW programming on a Sunday?

LEGENDS OF TOMORROW Season 4: They still have their Captain Planet elemental Powers. Mallus is only one of many monsters. And they make an inside joke about their ratings.

BLACK LIGHTNING Season 2: “Take the Light out of Black Lightning”… So that would make him Black Ning?

TITANS: Greg Berlanti  is listed as a developer and Executive Producer along with Akiva Goldsman and Geoff Johns. It’s Robin, but still Dick Grayson. Raven, Starfire, Hawk and Dove shown.

DISENCHANTMENT: From Matt Groening. Was that David Bowie’s “Rebel Rebel” on violin?

Other references made during the show: Earth Star Voyager (1988), Wendy & Marvin from SuperFriends, SuperFriends Cyborg.