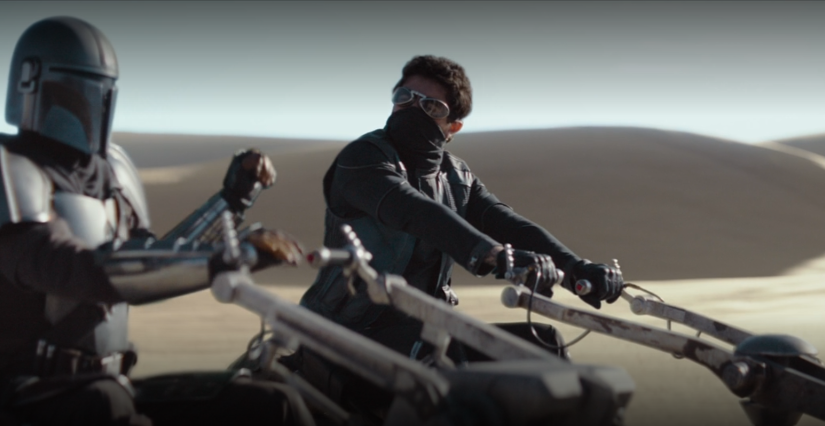 Perhaps the biggest news to come out of this episode is we finally got the introduction of Ming-Na Wen’s character Fennec Shand. It was also written and directed by fan-favorite Dave Filoni.

The Mandalorian entered its second half of the season with Chapter 5: The Gunslinger. This episode started out in media res with Mando in a dogfight against another bounty hunter over The Child. Mando outwitted and destroyed his pursuer, but not without sustaining heavy damage. In order to find repairs, Mando had to dock at Mos Eisley Spaceport.

While other episodes merely had other desert planets, this one made no confusion with where it took place. Mando convinced the local mechanic to look after his ship but somehow forgot about Baby Yoda despite being nearly inseparable from him for the past four episodes.

Obviously in need of work in order to pay for the repair, Mando befriended a local young bounty hunter at the local cantina. Sadly no Figrin D’an music playing, but there was another R5-D4, so that probably has fueled at least 17 different fan-fiction stories. The two set out to capture Shand so the kid can get his entry into the Guild.

Much like any Western, “The Kid” and “The Gunfighter” didn’t get along. And, of course, Shand is no slouch when it comes to protecting her own best interests. In the end, we got the classic stand-off. But this episode did have a final scene twist that showed Shand may be back sooner rather than later.

Aside from Mando somehow forgetting that he had a wandering child in his possession, this episode unfolded like another traditional western. It also felt like an adventure any RPG-er would have to the point where you could practically see the dice being rolled. That’s what I like the most about this show. It feels like the Role-Playing Game elements brought to life.