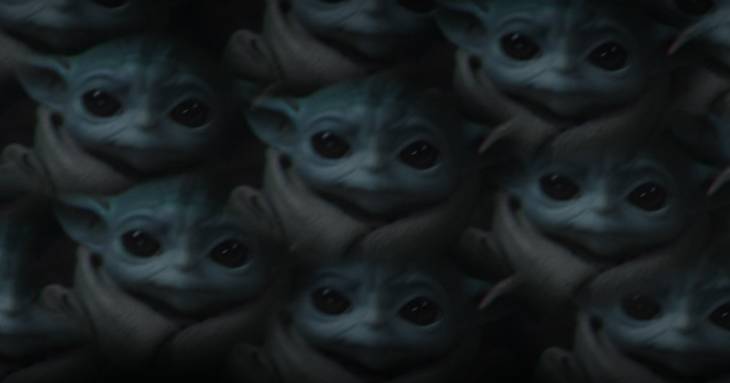 Fans have been asking questions all year long that get answered in this week’s episode.

Mando, Baby Yoda, and Frog Lady arrive on the planet Mon Calamari where Frog Lady reunites with her husband. Thankfully, The Child didn’t eat all of her eggs along the way. Mando leaves the Frog family and goes looking for information on other Mandalorians. This, of course, leads us to another cantina scene.

A Quarren offers to take Mando to a place where other Mandalorians are rumored to be. Unfortunately for him, it was a double-cross as The Quarren crew actually want his armor. They toss him and Baby Yoda into a tank with a giant creature that we could only see the jaws of.

Luckily, a team of three Mandalorians attack the ship and free our heroes. What happens next is a huge moment for the entire series, as the leader removes her helmet to reveal herself as Bo-Katan. This confuses Mando, as he only knows the way of his group of Mandalorians.

Mando quickly questions Bo-Katan about her armor and quickly learns that his whole belief of The Way isn’t the proper one. As fans of Clone Wars and Rebels know, Bo-Katan is the rightful ruler of Mandalore. She then tells Mando that he must have been adopted by a group called The Watch. Whether this group has any relation to Death Watch from Clone Wars is not clear.

Bo-Katan offers a deal where Mando will help them on their mission in exchange for information on Jedi whereabouts. Mando agrees and leaves Baby Yoda with the Frog family for safekeeping.

The rest of the episode is almost entirely action, with The Mandalorians seizing an Imperial ship. Once the ship is captured, Bo-Katan interrogates an Imperial Officer. She demands to know where Moff Gideon is and whether he still has the darksaber. Alas, the Imperial Officer commits suicide before giving her an answer.

As Mando leaves, Bo-Katan tells him of the planet Corvus and of Ahsoka Tano. Mando regroups with Baby Yoda and heads off to Corvus, but not before The Child has one more meal in the closing moments.

This week’s episode is the shortest one so far this season at a little over a half-hour. However, it still managed to cram a ton of story and action into those 30 minutes. We also got answers to long-running questions such as why Mando never unmasks while other Mandalorians unmask all the time. This will presumably lead to Pedro Pascal having more screen time without the helmet.

All told, this was right up there with the season premiere when it comes to overall quality. If this trend continues, we are in for a heckuva season two.