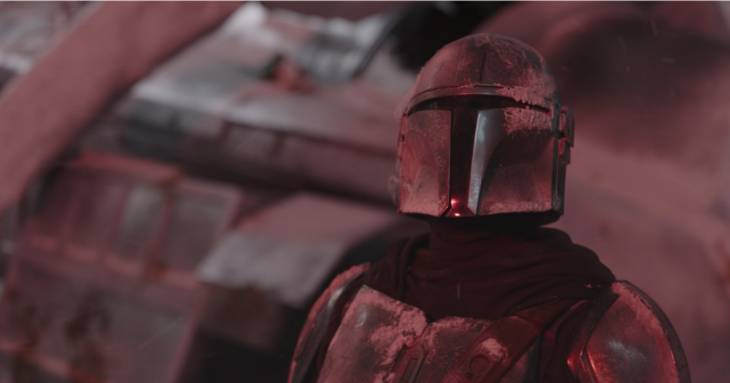 The second episode of the second season of The Mandalorian aired today. While it was not the epic adventure the first episode was, it still raises some questions that will hopefully be answered.

When we last tuned in, Mando/Din destroyed the Krayt Dragon and won Boba Fett’s armor. This episode saw Mando fly a humanoid frog to safety.

This was the episode that showed the ice planet in the trailers. It was not Hoth. It picks up right after the end of Chapter 9. On the way back to The Razorcrest, Mando gets jumped by bandits, and Peli’s speeder is destroyed.

Upon his return to Mos Eisley, Mando is given a new job from Peli Motto. He is tasked to fly a Frog Lady (seriously, that’s what the character was credited as) to a neighboring planet. Baby Yoda had other plans, namely dinner. He gulped down at least three of the eggs over the course of the episode.

The problem starts when Baby Yoda feasts on some spider eggs. This alerts the attention of the Queen Spider. The rest of the episode deals with Mando fending off the spider army.

It is worth noting that the Queen Spider was inspired by Ralph McQuarrie concept art for The Empire Strikes Back.

I did not make any list of major points because there didn’t seem to be any that warranted being called “Major”. We already know Baby Yoda’s appetite gets our heroes in trouble. We saw another cameo of Dave Filoni as Wolf. But that’s about it unless you’re crazy about spiders.

This was a huge step down from the season premiere. I am confident that there will be answers to questions asked in this episode. That said, there wasn’t much that was needed to remember in the grand scheme of things. Maybe I’m wrong, time will tell.