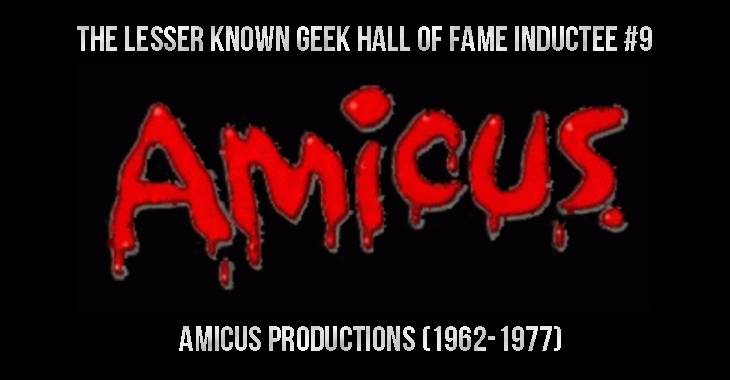 Our latest induction into The Lesser-Known Geek Hall of Fame is also our first induction of a movie studio. Amicus Productions existed from 1962-1977 as an English production studio, despite being formed by two American producers Milton Subotsky and Max Rosenberg.

Subotsky and Rosenberg had collaborated on film projects before. In fact, Rosenberg had submitted a pitch for a Frankenstein revival that wound up being given to Hammer Films which became Curse Of Frankenstein. They formed Amicus Productions shortly after. Rosenberg handled the money and funding while Subotsky had more of a hand in the creative process.

While Hammer Films focused mainly on horror projects, Amicus tried to other genres ranging from horror to sci-fi to thrillers. They may be most famous for making the two standalone Dr. Who movies, Dr. Who And The Daleks and Daleks Invasion Of Earth 2150 A.D. Both films starred Peter Cushing. We did more extensive coverage of these two films in a past episode of Examining The Doctor.

Over the years, many of the Amicus movies would be mistaken for Hammer Films productions due to many of the same cast being used (Peter Cushing, Christopher Lee, Michael Gough).

Most of the movies are summarized, and you can see a pretty extensive list here.

There are books available online and GoodReads if you want to learn more about Amicus Productions.

Crazy Train does have a Halloween Playlist with over 10 hours of Scary Tunes for your Halloween Party.