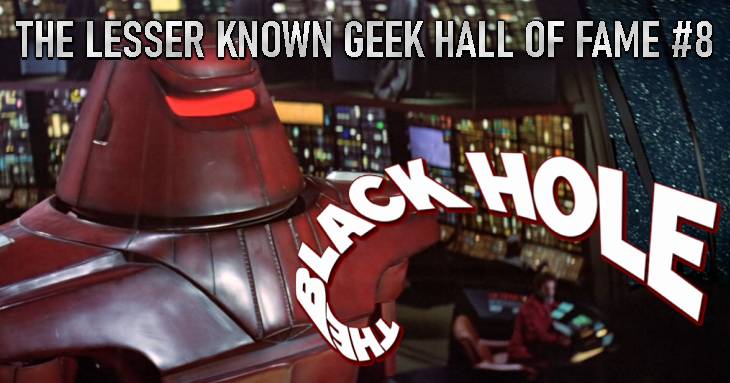 Seth and Crazy Train return for the latest induction into the Lesser Known Geek Hall Of Fame. As longtime fans may know, inductees are not limited to just characters or people. Superheroes, literary characters, heroes, villains, real people, etc… For the first time, we are inducting a feature film. And there is no better inaugural movie inductee that 1979’s The Black Hole.

The 1970s were rife with disaster films such as The Poseidon Adventure, Earthquake, and of course the Airport series. The reason why they were so plentiful is that many of them drew big at the box office. The Poseidon Adventure alone earned $125 million in 1972, which translates to over $700 million in 2020 dollars. So the idea of a science-fiction disaster movie didn’t seem too out of place.

Writers Bob Barbash and Richard Landau made the initial pitch in 1974 about a space station in peril. The suspense would be getting the inhabitants home safely before the station is destroyed. This concept was very much like a sci-fi version of The Poseidon Adventure, which took place on a cruise liner and coincidentally also starred Roddy McDowell and Ernest Borgnine. The project was approved by Disney and given the working title Space Station One.

Barbash & Landau submitted their first outline to Disney later that year. Producer Winston Hibler proposed the danger be changed from a supernova to a black hole, as black holes were still a relatively new discovery at the time.

Over the next few years, the film was constantly rewritten by multiple writers. The title would also change over time to names like Probe One and Space Probe One before finally landing The Black Hole as its name.

Unfortunately, Hibler passed away in 1976. Producer Ron Miller, who assigned Hibler to the film in the first place, took over the project. Miller could tell that the disaster movie genre was fading and decided to take the film in a new direction. More writers were hired for additional rewrites to focus more on the characters and less on the disaster element.

By early 1977, Disney had grown impatient. The project was already three years old with no end in sight, so the film was shelved. Little did they know everything was about to change

The entire film industry was rocked in May of 1977 when a certain independent film called Star Wars was released. Suddenly, science-fiction was a mainstream genre. Interest in the film, then still called Space Station One, was renewed. Yet another outline was submitted, but this version added emphasis on the black hole itself.

By this time, director John Hough left the project and was replaced by Gary Nelson, who was probably most famous for directing Freaky Friday. Nelson did not like the script and thought it was still filled with standard Disney-like characters. Screenwriter Gerry Day was hired to rework the script to please Nelson. This is when the film was given the final title of The Black Hole.

Miller made the formal decision to make the film with adults in mind, citing that their kid-friendly image was limiting them at the box office. He wanted The Black Hole to be Disney’s first-ever PG-rated film.

As stated before, the premise changed from a straight-up disaster film to one with a villain, Dr. Hans Reinhardt. This new premise saw explorers find Reinhardt’s ship, the USS Cygnus, in deep space. At first, all seems well until Reinhardt’s true insidious history is discovered.

Another major change to the final script was the elimination of families and children onboard the Cygnus. Thus, only eight credited roles were given for the movie.

Neither Roddy McDowell nor Slim Pickens received onscreen credit for their voice roles. The evil robot Maximilian had no dialogue, so no credit was needed.

Even though the film was geared for adults, the robots were designed to be kid-friendly. The Sentry’s heads did have a little bit of Darth Vader in them.

One of the problems with the film was there was never a firm ending written before production. Even the cast didn’t know the ending until seeing the film at the premiere. The ending has been generally interpreted as Heaven and Hell. But it is worth noting that the Disney producers were hoping for the film to become a franchise with multiple sequels. It’s a pretty safe bet that had the film been a bigger success, the ending would have been a setup for the next story.

The Black Hole deserves credit for helping bridge the gap from traditional sci-fi to modern mainstream sci-fi. And as stated before, it helped usher in a new era for Disney that appealed to adults as well as children. Those precedents alone make it worthy of being the latest entry into The Lesser Known Geek Hall Of Fame.

Keep in mind if you watch the movie on Disney+, there is a two-minute overture that opens the film with no video, just a black screen.

If you want to know more about the making of The Black Hole, check out this YouTube video by GoodBadFlicks

CORRECTION: Florence Henderson is NOT in Freaky Friday as Seth claimed. It was an incorrect memory.