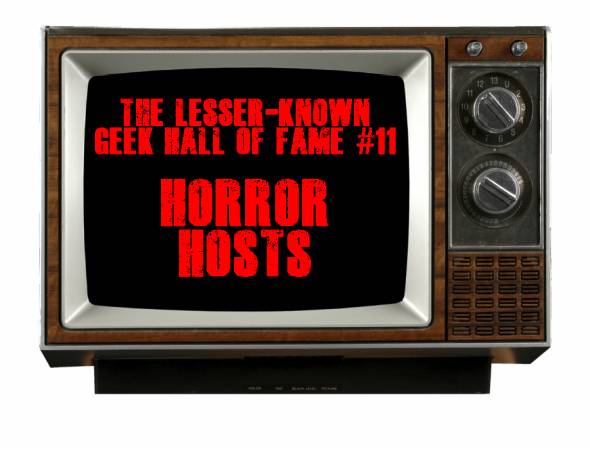 The month of Halloween continues here at Geekville Radio and we are inducting our Halloween-themed entry into The Lesser-Known Geek Hall Of Fame.

There were many Horror Hosts over the years. Not only too many to name, but some that became way too popular to be considered “lesser-known”. A certain well-endowed beehive hairdo-wearing hostess comes to mind… But the pop-culture icons of today wouldn’t have existed without many of the names we list below.

Perhaps the earliest late-night horror host was Vampira, who had a show in Los Angeles in the mid-1950s. After that show ended, Shock! was sent to TV stations around the country with a collection of old horror and sci-fi movies. These stations then hired their own local hosts who filmed wraparound segments that aired throughout the movie run.

Pittsburgh had Chilly Billy, New York had Zacherley, LA had Sinister Seymore, New Orleans had Morgus The Magnificent, and Chicago had Svengoolie. Actually TWO of them!

Those local hosts inspired what would become national cable TV in the 80s and 90s with the most popular probably being Elvira. Others included Grandpa Munster himself Al Lewis, Rhonda Shear, and Joe Bob Briggs. Even Mystery Science Theater 3000 writers have given credit to these past hosts for inspiration.

Today, the world has social media, YouTube, Roku, and countless other mediums where people can share their love of old and new horror schlock with the world. The art is not likely to go away anytime soon!