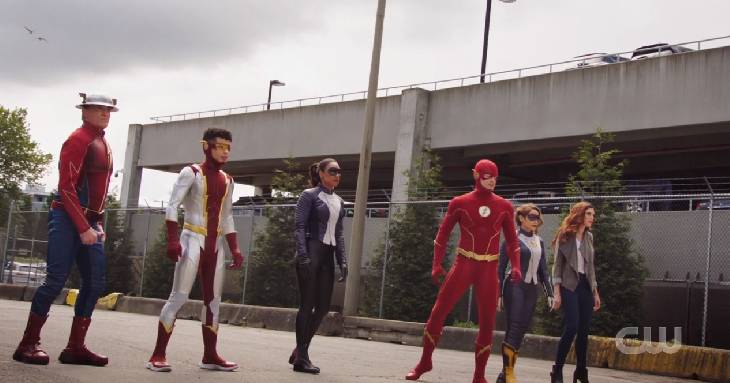 WARNING: Spoilers ahead for The Flash Season Seven Finale “Heart of the Matter”!

In 2049, Nora (XS) captures Godspeed and notifies Gideon. Before Gideon can respond, Godspeed pops up and zaps XS with lightning blasts a la Emperor Palpatine. Suddenly, Bart (Impulse) phases through him, knocking him out. XS scorns Impulse over this recklessness because his molecules could have erupted. While the two siblings argue, Godspeed disappears into the street and reappears at The Flash Museum. They rush there only to see him leap into time travel.

In the present day, Team Flash gets XS and Impulse up to speed on how August has no powers. Chester shows off the plans he found for a device that could siphon off Godspeed’s Speed Force power. A grief-stricken Allegra tries to charge the machine but is unable to. Barry is able to do so by using his own kinetic energy.

A clone battle royal breaks out at City Hall. The three speedsters rush to fend them off. All the clones wind up chasing Bart instead of all three because Godspeed is Bart’s arch-nemesis. Barry and a returning Iris decide to keep him from going out on future missions to keep him safe.

Joe and Kramer submit their story about Creyke to the police. Joe suspects something is up in Central City because nobody is answering their phones. Meanwhile, in Keystone City, Jay Garrick is attacked by several clones.

Nora tries to comfort Bart over getting benched by their parents. Bart reminds her that Godspeed killed Jay. She assures Bart that she will take Godspeed down for both of them.

Barry and Nora lure several clones into the path of Chester’s machine. While the machine succeeds in stealing their energy, the clones are still somehow able to instantly recharge again. Barry tries to protect Nora from their attacks until Frost jumps in to knock the clones out again so the heroes can escape.

The clones send Team Flash a message: Hand over Bart or Jay Garrick dies. Bart rushes off to confront the clones and runs right into a trap. It’s up to the rest of The Flash Family, and a returning Cisco, to save him.

Once Bart is safely back at Flash HQ, Barry decides to enter August’s mind to find out once and for all if the key to defeating the clones is within him. He finds August, decked out in his Godspeed suit, in full-on villain mode. Barry learns that in order to defeat the clones, August will have to be given speed. The problem is, of course, that will assuredly result in August becoming Godspeed and taking over the world years later.

The clone army wreaks havoc on the city. One tries to kill Joe but Kramer saves him by somehow running in like a speedster and taking him to safety. She later learns that she herself is a meta who can temporarily mimic the powers of other metas.

Back in the real world, August assures Cecile that he will not go down the villainous path. However, once he is finally given Speed Force Power, he changes his tune and says he likes being the bad guy after all. Fortunately, Barry has a plan! In runs Eobard Thawne, still looking like Harrison Wells! Thawne agrees to help Flash because any other speedsters are competition.

Flash and The Reverse Flash confront Godspeed, who creates a “Speed Force Sword”. Somehow Flash and Thawne have their own swords. The three duel Phantom Menace style all over the city. Eventually, Flash and Thawne are victorious.

Thawne being, well… Thawne, wastes no time in attacking Barry. However, Barry demonstrates his enhanced powers and disposes of Thawne easily.

With Evil defeated and The Future saved, everybody goes back to STAR Labs. Barry and Iris renew their marriage vows. For once, the heroes have a happy end to their story with no stinger to tease the next season

There were some real peaks and valleys with this season. While Godspeed was a cool villain, the clone army and the Speed Force Lightsabers got really hokey. Plus the departure of Cisco and Wells definitely hurt the enjoyment factor. Chester is still a fun addition to the team though.

It will be interesting to see what will happen next season. If we get a full Season Eight, The Flash will have officially run longer than Arrow.

One thought on “The Flash Season Finale Review”