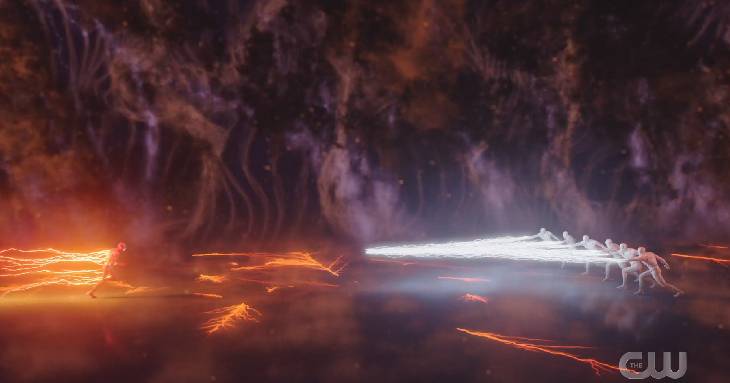 Barry is at home watching news coverage on the Godspeed clones wreaking havoc on the city. He then sees a vision of Nora pleading with him to do something before it’s too late. Then, like in the last episode, Barry awakens and realizes it was a vision.

Barry returns to STAR Labs where he learns that the clones have built up such an electric charge that people won’t be able to do things like phone or text. This upsets Cecile because she hasn’t heard from Joe or Kramer since they left.

John Diggle visits Team Flash with a new gadget from Cisco, an entropy trap. It freezes objects or people in time and preventing them from moving. Barry devises a plan to catch a Godspeed clone and bring it in for questioning. While this is going on, Esperanza decides to continue her quest to topple the Black Hole.

Barry is able to successfully help catch one of the clones. The clone says they have come back in time to kill August Heart because he will take over the world in their future. Barry is willing to help, but he will not take part in any killing. The clone, believing anybody who is not a friend is an enemy, manages to bust out of his cell and smash the entropy trap.

Cecile and Diggle go after Heart but are stricken with major headaches. One even hits Diggle while he fights with another clone. Cecile finds August and assures his safety if he comes with them.

After getting encouragement from Kaitlyn, Barry reluctantly decides to travel to the future to see for sure if his family is still in danger. However, he gets plucked out of the timestream by Deon, who tells him Iris needs his help. She has been passing through temporal frames for some unknown reason. She is also experiencing similar headache symptoms similar to Cecile and Diggle.

Allegra finds her sister critically injured from battling Black Hole thugs. She pleads with her to not die, but to no avail. Ultraviolet dies and disintegrates in Allegra’s arms.

Elsewhere, Joe and Kramer catch Creyke. They quickly realize Creyke is an immortal meta. He dares them to kill him since he cannot die.

Chester tells the team that the clones are getting exponentially faster each time they come back. Not only that, but they are also coming back in faster intervals. Cecilia cannot find any indication of danger with August. Caitlyn also notices there is no trace of speed powers in him either. However, despite the indication of memory loss, there doesn’t seem to be any damage to the brain.

Diggle informs Barry that he is heading home to take care of something that has been bothering him. It looks like he meant the presumed lantern ring he got at the end of Arrow‘s finale.

Tests on August confirm he is the real one. But since his memory is gone they cannot tell whether he has powers or not. After Barry laments about being back to square one, Nora returns from the future. She assures him everything is still going well.She then introduces Bart Allen, aka Impulse… Barry’s son.

This was a better-than-usual episode. Most comic fans will likely be disappointed to see that Impulse is Barry’s son and Nora’s brother when, in fact, their comic book counterparts are cousins. They’re also both from the 30th Century, not the 21st. We’ll see how much of a factor he plays in the season finale.