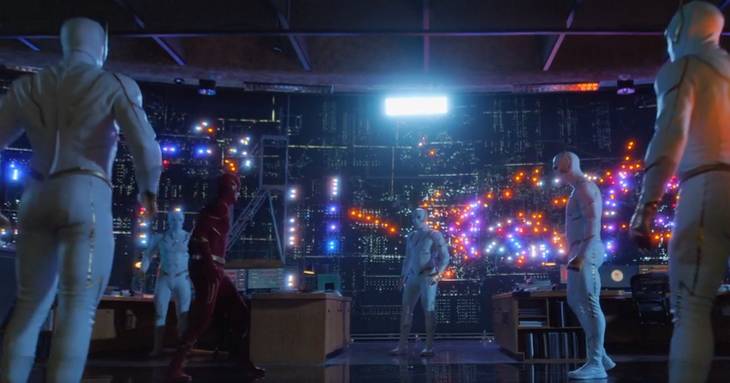 The Godspeed Clones return to wreak havoc on The Flash

Barry is doing some late-night work when he is visited by Nora (his daughter Nora, not Speed Force Nora). She tells him that everything will work out. After a brief embrace, Barry wakes up and realizes it was a dream… or perhaps a message. He phones Iris to tell her that he thinks she’s pregnant with Nora. He spends the next few segments awkwardly trying to avoid his friends and coworkers because he wants to reveal Iris’s pregnancy at the right time.

Joe and Kramer make some headway in the Operation Griffon case and the whereabouts of Adam Creyke. He used Claymore mines to wipe out Kramer’s unit. Joe discovers that there is a boat registered with the name Rasputin, which matches Creyke’s callsign in the Army.

A group of Godspeed clones begin gathering in the streets. Elsewhere, Caitlin and Allegra work to help repair Ultraviolet’s throat.

Frost breaks up a fight between Chillblaine and some thugs. She reluctantly offers to take him to STAR Labs to get his injuries treated because he has already busted up all of the hospitals.

The Godspeed clones begin attacking the city in search of The Flash. Chester warns Flash that he’s going into a trap. Barry then races back to STAR Labs just before Chester activates a forcefield to keep the clones out. Frost enlists Chillblaine to help against the clones, who are breaking through the forcefield.

Flash lures the clones away from the lab. However, they are able to surround him and blast him with their lightning power. Suddenly, additional clones appear and start fighting the ones attacking Barry. The team suspects that there is a civil war between the clones.

Frost and Chillblaine bond over drinks. Just when they are about to kiss, a canister pops open. Frost looks at it, but when she looks back, he is gone.

At last, Barry works at the pregnancy test. He then is shocked to see that it’s negative.

Joe and Kramer stake out Creyke’s home. Joe sees an odd light coming from behind them. Kramer panics and tells Joe to get out of the car. Before they can, the car erupts into a huge ball of flame.

This was an above-average show for this season. There is a very strong hint that Creyke is Godspeed, but that still could be a red herring. My hunch is one of the “good” clones actually grabbed took Joe and Kramer out of the care a split second before the explosion. Having Barry only communicate with Iris via phone was a bit awkward, but it was pretty apparent that Candace Patton wasn’t in the episode.