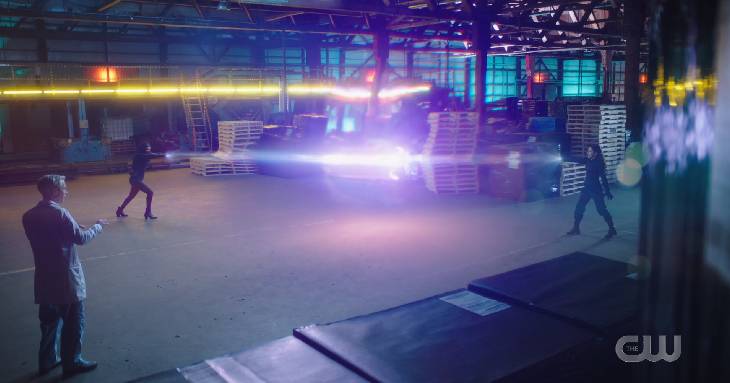 A major continuation in Allegra’s story with her cousin, Ultraviolet

Barry and Iris go on vacation leaving Kaitlin, Allegra, and Chester to run Team Flash. Ultraviolet shows up and starts more trouble with her cousin. Sue shows up to break up the fight and the team decides to taker Ultraviolet down.

Allegra and Sue actually taker her down fairly easily, but in doing so they allowed Dr. Olsen to escape. He is the mad scientist that created her in the first place. Allegra vows to help her catch him.

Joe visits Kramer with the information he found about her past with Operation Griffon, in which she led soldiers in her unit into an ambush. She angrily rejects him and kicks him out of her office. However, she does text him later and offers to meet him.

Ultraviolet confronts Olsen, who somehow convinces her to kill Team Flash in exchange for her voice back. When Allegra shows up a battle ensues which ends with Allegra finally using her abilities to overpower her. The fight also knocks out Olsen.

Oleson is arrested, the cousins make their peace, and Kaitlin discovers he can cure Ultraviolet. Joe secretly meets with Kramer. She tells him that her unit was betrayed by one of her closest friends, Adam Creyke. She has since been looking for him for the past six years.

In the epilogue, Frost confronts Chillblaine after his escape from Iron Heights. Instead of fighting her, he reveals that his record has been cleared and he is a free man.

Once again this season has a standard run-of-the-mill episode. It was cool to see the supporting characters take center stage, but there wasn’t anything riveting about the plot. Olsen hardly felt like any sort of credible threat, so it’s hard to believe that Ultraviolet would side with the man she was literally trying to kill a few minutes earlier. Kramer seems to be all over the place. On one hand, she’s a no nonsense cop and on the other she’s also got this vendetta against other heroes. I can only assume we’ll get more to he story when Creyke appears in the flesh.