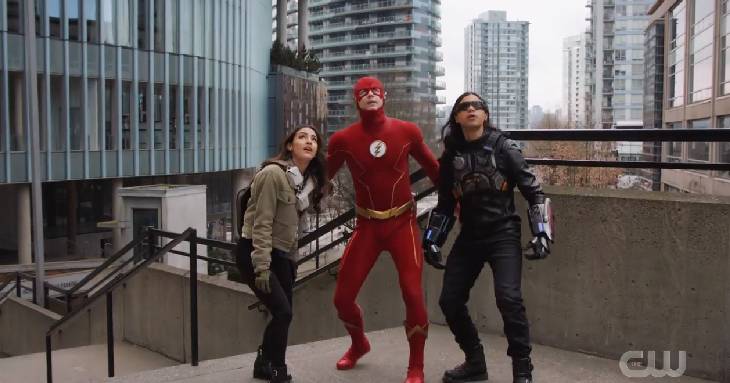 This looks to be the beginning of the end for Cisco/Vibe based on the title.

SPOILER WARNING! Do not proceed if you wish to avoid spoilers!

Cisco announces that he has been offered a job at ARGUS and he and Kamilla will be leaving Central City the next day. He shows Chester a room full of archived stuff,

Over at a bank, a new meta named Carrie has mind control powers that make her victims uncontrollably happy. This of course eventually affects Team Flash and they all wind up messing around at Star Labs. Chester manages to cure them and the team gets back into their normal frame of mind.

The team realizes that Carrie has been stealing money and riches to give to Central City citizens. She believes that the system keeps average people down and this is her way of fighting back. She hijacks a stealth blimp (which makes zero sense but more on that later) that she plans to use to drop all the money and riches into a football stadium filled with 20,000 people.

Allegra teleports Flash and Cisco onto the blimp. They are able to stop Carrie but short out the blimp’s controls in the process. Cisco convinces Barry to get everybody free while he finds a way to keep the blimp from crashing into the stadium and exploding (again, this makes no sense but more on that later).

After Cisco saves the day, Team Flash throws a going away party that involves karaoke, which is a throwback to the early episodes. A flashback montage (no pun intended) is shown giving highlights from the last six seasons.

In the epilogue, Cecile comes home and hears a disembodied voice. Upon looking in the mirror, she sees a weird mask instead of her reflection.

Everything good and bad about the series was all rolled into one episode. As usual, the acting and the chemistry of the actors was great. The throwbacks to past episodes was a great nod to fans and a nice emotional sendoff for Cisco.

That said, the concept of a “stealth blimp” alone is absurd, let alone one filled with hydrogen. Modern blimps use helium, not hydrogen, specifically to keep them from being so explosive. Maybe there was no Hindenburg on this Earth, but that is still a hard one to take, even for a comic book show. Plus, having an airship explode in a football stadium makes me think somebody saw the movie Black Sunday.

I’m assuming whoever is residing within Cecile will be the main baddie for the second half of the season. The mask looked a little bit like Godspeed, but he’s already been dealt with. Plus, we do have Kramer and her obsession with ridding Central City of metas. And, of course, Joe is still unemployed.