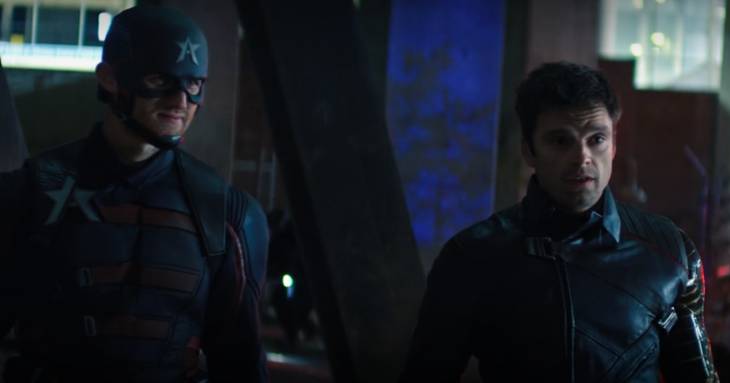 Obligatory SPOILER WARNING: Do not proceed if you don’t want to know what happens in the final episode!

Last episode ended with The Flag Smashers hacking the GRC building. This episode picks up right where it left off.

Sam flies overhead in his new suit while Sharon Carter meets up with Bucky to help on the ground. Sam quickly surmises that Karli is forcing the people to evacuate by gassing the building. He rescues the people aboard a helicopter that was commandeered by a Flag Smasher

Suddenly, John Walker appears with his own shield and assists Bucky on the ground. Karli orders the shuttle trucks carrying the GRC passengers to be set ablaze to distract the heroes. However, they manage to save all the vehicles.

Karli flees the scene but is intercepted by Sharon. After the two verbally clash over whether the world should be changed or ruled over Karli claims that the Power Broker doesn’t have the power to rule the world without her and her super-soldiers. Sharon reveals herself to be the Power Broker. Batroc, upon hearing this, pulls a gun and demands Sharon quadruple her payment or he will tell the world her identity.

Sharon refuses, saying she doesn’t do blackmail, and guns down Batroc. Karli then shoots Sharon in the gut. Before Karli can finish her off, Sam intervenes. Karli lashes out against him but Sam refuses to fight her. Unfortunately, she remains defiant and Sharon has to shoot her to save Sam.

With Karli dead and the rest of The Flag Smashers being rounded up, the GRC head thanks the heroes for their help in defeating the terrorists. Sam objects at calling them terrorists and points out that the government authorities were rounding them up at gunpoint. To those people, that can also be looked at as terrorism. He follows up by saying they all have a common goal now: To figure out why people stand up to revolt like this, and what can be done to avoid more people getting hurt.

The crowd disperses, and the Flag Smashers are loaded into a truck. However, after a few blocks, the truck is remotely blown up by Zemo’s butler, Oeznik . Zemo himself hears of their murders as he sits in his cell on The Raft.

Back in DC, Valentina welcomes Walker as US Agent. Bucky also manages to finally tell Yori that Winter Soldier killed Yori’s son. Sam takes Isaiah to the Captain America exhibit seen in the first episode and shows him a statue made in his honor.

In the mid-credits scene, Sharon is granted a full pardon. But after she leaves, she tells somebody over the phone that she will soon have access to new weapons and technology.

As expected, the main plot points were handled, but new questions were raised in the fallout. I’m sure at least some of the above questions will have answers when Black Widow hits theaters. I also wouldn’t rule out a connection to Secret Invasion.

If there was anything to criticize, it would be that some of the underlying plot points seemed to be wrapped up in a few seconds. We learned all the way back in the first episode that Bucky killed his friend Yori’s son back when he was The Winter Soldier. Bucky finally fessing up felt like it should have had more emotion than it did. The same goes for Walker, who went from trying to kill Sam and Bucky to rubbing elbows alongside them to fight the Flag Smashers.

Fans have wondered if there will be a second season. While anything is possible, the chances of another season with the same title seems unlikely. I think it’s far more probable that we’ll get something like Captain America and The Falcon or Bucky Barnes Agent Of SHIELD.