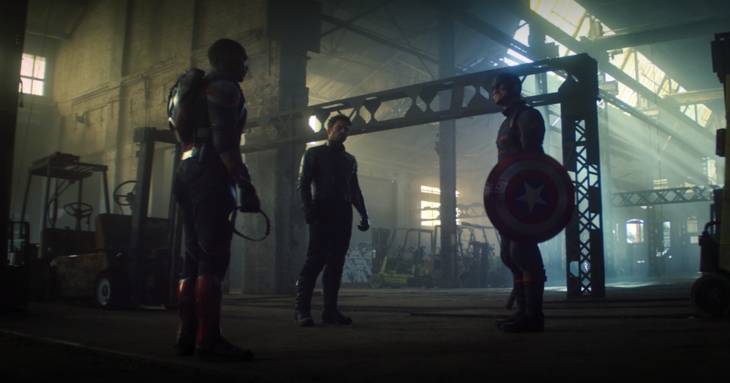 There has been a lot of fan speculation leading into the penultimate episode of The Falcon and The Winter Soldier.

OK, maybe that last question is a bit of a stretch, but fans have been wondering who The Power Broker is and what character will be debuting this week.

As usual, we have an obligatory SPOILER WARNING for those who don’t want to know the answers ahead of time.

Last week’s episode ended with the new Captain America John Walker (Wyatt Russell) brutally killing Nico of The Flag Smashers in a fit of rage after Karli Morgenthau killed Lemar, aka Battlestar. Not only did New Cap kill an unarmed man, the murder was seen by dozens of witnesses who recorded the killing on their smartphones. Needless to say, Walker will have to answer for his actions.

This episode opens with Sam and Bucky catching up with Walker and having a tense conversation about his actions. Walker defends the killing by saying Nico killed Lemar, when in fact that was not the case. Sam tries to persuade John to hand over the shield and report back that it was in the heat of battle.

John, seeing this as nothing more than an attempt to grab the shield, resists and a fight breaks out. John grows increasingly enraged and rips Falcon’s wings off. He then tries the same killing blow he used on Nico. Fortunately, Bucky saves Sam and knocks him out with the shield. The two then leave the defeated Walker, carrying the shield with them.

Upon his return to the States, Walker is stripped of the Captain America title and discharged from the military.. He responds by lashing out at his former superiors, stating that they do not understand the situation. Walker is approached by Valentina Allegra de Fontaine (Julia-Louise Dreyfus) afterward. She sympathizes with John and encourages him to contact her about a proposal.

The Flag Smashers return to their homem only to find it it has been shut down by the GRC. Karli laments about their fallen friends and declares it is time to start the next phase of their movement.

Bucky tracks down Zemo in Sokovia. He points a gun in Zemo’s face, but has the when he pulls the trigger, the gun clicks. Bucky reveals the gun was empty and has the Dora Milage to apprehend him.

Meanwhile, Sam catches up with Isaiah Bradley. (Carl Lumbly). Bradley tells him about the horrors he experienced while in jail. Despite Sam’s pleading, Bradley refuses to go public about his story and that there will never be a black Captain America.

John visits Lemar’s parents and lies to them, stating that he killed Lemar’s murderer. Meanwhile, Sharon Carter (Emily VanCamp) speaks with Batroc over the phone. She offers him twice the pay to do another job for her.

Sam organizes an effort to restore his sister’s boat. He also presents Sam with a case which he calls a gift from Wakanda. A Rocky-like montage followed with Sam vigorously training with the shield.

Torres warns Sam that there may be a Flag Smasher presence in New York. Sam finally opens the case from Wakanda but its content is not revealed

Batroc joins up with The Flag Smashers. Karli reveals that they will strike tonight. Later, The GRC is planning to vote about whether to force Blip victims to relocate back to their home states. An alarm blares and a sudden shutdown occurs, likely due to a Flag Smasher hack.

In the first post-credits sequence in the series, John Walker is using his military medals to craft his own custom shield.

This lacked the energy and action of previous episodes, but it made up for it with significant story advancement. I actually didn’t notice how little action it had until after I was done watching. We’re probably set for a high-action finale with all of the players colliding. Given Walker’s mental instability, it may be very hard for him to change into the more heroic character that is his comic book counterpart. That said, this episode clocked in at over 52 minutes not counting the end credits. It’s very possible we could have an even longer finale.

What did you think of the episode? Let us know below!