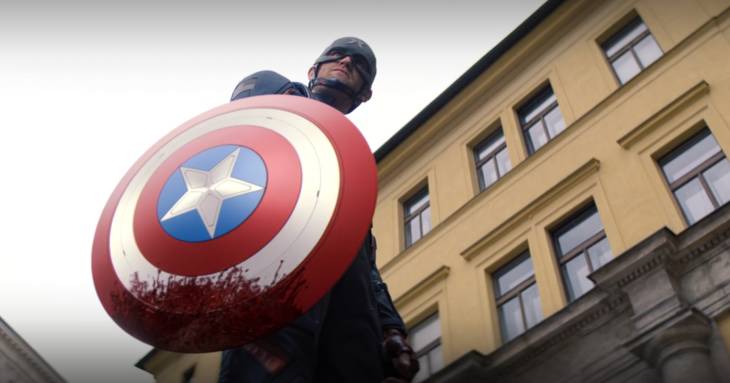 The second half of Season One is here and picks up where the last episode left off. Bucky, Sam, and Zemo race against time to locate Karli Morgenthau before the Dora Milaje come for Zemo.

As usual, MAJOR SPOILERS ahead!

The episode begins in Wakanda around the time of Civil War with Bucky being “unbrainwashed” by Ayo. It then cuts back to the present where she gives Bucky an eight-hour deadline to take care of the problem before the Wakandans come for Zemo.

Zemo learns of the funeral for Donya Madani. Sam and Bucky agree to attempt reasoning with Karli to avoid any more violence. New Cap shows up and demands Karli be arrested on the spot. However, Battlestar (Lemar Hoskins) is able to compromise with Cap to let Sam have ten minutes with Karli before any further action is taken.

After Karli and the locals give their goodbyes at the funeral, Sam tries getting through to her. Unfortunately for him, Cap storms in to arrest her. Karli, now believing this was all a set-up, flees through the maze of buildings. Zemo manages to find Karli and wound her with a gunshot.

In the ensuing action, Karli spills the remaining vials of the serum. Zemo starts destroying them, allowing her to escape. Walker knocks Zemo out with his shield but secretly pockets the single remaining vial. Karli then meets back up with Dovich and reveals her next plan: To kill Walker after luring him away from the others.

Walker orders Zemo to be put back into custody. Sam resists, so Walker starts taunting him into a fight. Before anybody comes to blows, Ayo bursts in and also calls for Zemo to be handed over. Walker tries pulling the “I’m Captain America” card but is met with force. Walker and Battlestar are quickly outmatched by the Dora Milaje. Zemo silently escapes during the fight. With Zemo gone, the Dora Milaje leave to find him. Walker is left demoralized over losing a fight to non-super-soldiers.

Karli contacts Sarah and threatens her if Sam didn’t meet with her. Sharon warns Sam that Walker is on the move. The Flag Smashers ambush the group and battle throughout the building. Karli attempts to stab Walker with her knife, but Lemar makes the save. Karli responds by punching him so hard he crashes through a pillar, seemingly killing him.

The Flag Smashers retreat with Walker chasing after them. He manages to catch one of them and beat him to death with the shield. Dozens of civilians look on and catch everything on camera with their smartphones.

This arguably was the best episode yet with more character development for Karli and Walker.