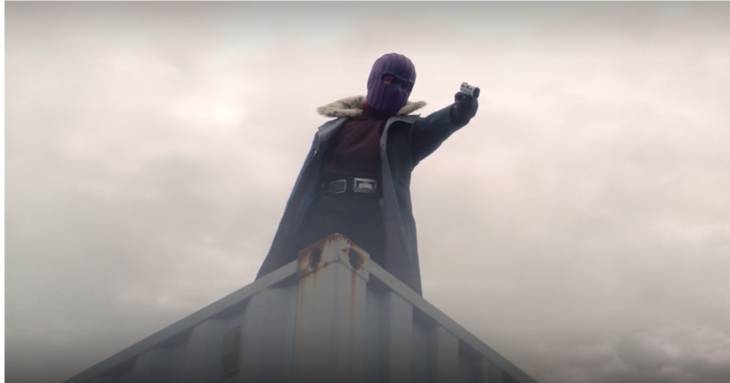 Sam and Bucky reluctantly seek help from an old adversary. Meanwhile, The Flag Smashers deal with a personal loss.

As usual, Massive SPOILERS within!

John Walker (aka New Cap) is on the hunt with the GRC (Global Repatriation Council) to find Karli Morgenthau. They break into the Flag Smashers’ hideout demanding the residents hand her over. The owner denies everything and even spits in New Cap’s face. However, since it is a private residence, Walker and Battlestar are forced to leave empty-handed.

Bucky meets with Zemo, who is in a Berlin prison. He informs him that somebody has recreated the super-soldier serum. Zemo, believing Bucky thinks HYDRA is behind it, offers to help. Bucky coordinates a prison riot which allows Zemo to escape. Sam is, of course, vehemently against the idea of working with Zemo.

While Karli meets with her dying mother in Latvia, Zemo and the heroes travel to Madripoor. They go undercover to meet Zemo’s contact, a woman named Selby. They learn that Dr. Wilfred Nagel is the one who recreated the serum. Unfortunately, Sarah calls Sam on his phone, blowing his cover. But before anybody can react, Selby is shot and killed by an unknown sniper.

A bounty is quickly put on the trio’s heads for the murder of Selby. During a fight, the unknown sniper saves them from some bounty hunters. The gunman turns out to be Sharon Carter, still on the run eight years after Civil War. Sam bargains with Sharon to get her a pardon in exchange for her help.

While the three locate and interrogate Dr, Nagel, Sharon is left to deal with the half-dozen bounty hunters. Nagel explains that he was able to recreate the serum using Isaiah Bradley’s blood, but was blipped away before he could perfect it. He also revelaed that Karli stole his remaining samples. Sharon bursts into the lab, alerting the team that they have to leave. Zemo shoots Nagel for good measure, ensuring the serum is lost again.

Bucky, Sam, and Sharon get in a firefight with the bounty hunters while Zemo disappears. He comes back at the end of the fight in a classic Pontiac Firebird. Sam and Bucky leave Sharon, who regroups with an unidentified friend.

Karli and her fellow Flag Smasher Dovich regroup after Madani’s death while Walker and Battlestar arrive in Berlin, determined to find Bucky and Sam. The Flag Smashers raid a GRC building for supplies and blow it up when they leave.

Zemo, Sam, and Bucky plot their next move in Latvia. There, Bucky is confronted alone by Ayo of Wakanda’s Dora Milaje, who says she’s come for Zemo.

This was another worthy episode that followed up with answers to questions from the last episode. This marks the halfway point of the series and it will be interesting to see if the quality stays high.