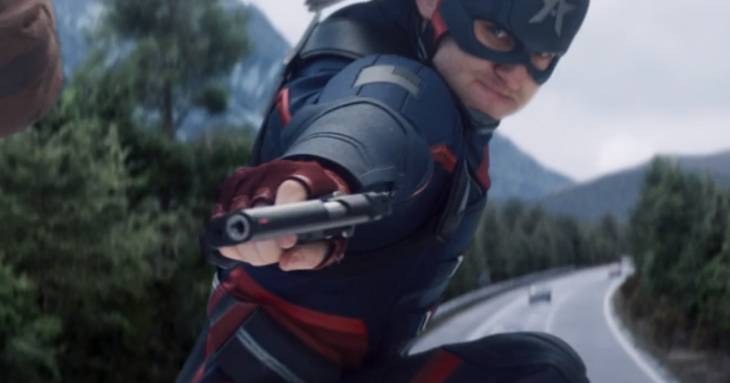 When we last checked in, John Walker was being introduced to the world as the new Captain America. This led to many questions from casual fans, as well as some hilarious memes. Episode 2, The Star-Spangled Man, gave us a glimpse at the man behind the mask.

The episode opens with John Walker being interviewed at his own high school where it’s revealed that he has three Medals Of Honor during his service in the US Army. Bucky watches this from home, clearly upset that someone new has picked up the mantle of his best friend.

Bucky confronts Sam about giving up the shield, to which Sam replies that he has bigger things to worry about. The duo travel to Germany to investigate Flag Smasher activity. There, Bucky encounters Karli Morgenthau, who he believes is a hostage. However, Karli immediately shows that she is a Flag Smasher herself. The ensuing battle takes place on top of two rigs where New Cap and Battlestar try to help out. Despite their training, all four are handily overwhelmed by the terrorists.

Sam and Bucky quickly realize that these Smashers are all super-soldiers. New Cap asks them to join him, but they flatly refuse. Walker still gives them a lead on where Karli could be hiding.

In Baltimore, Bucky and Sam meet up with Isaiah Bradley, who was a super-soldier project after Steve Rogers went missing. Not only was Isaiah sent on dangerous missions, but he was also imprisoned and experimented on over the next 30 years.

When authorities attempt to stop Karli and The Flag Smashers from boarding a plane, one of the Flag Smashers charges at them, sacrificing himself to buy time for the Smashers to escape. But when the Smashers make it to their hideout, Karli receives an anonymous text message saying she will be hunted down and killed.

Sam and Bucky decide they need to talk to the one person who may know the most about the super-soldier serum, Baron Zemo himself. The final shot is of Zemo alone in his prison cell.

This was not quite as good as the premiere, but it certainly was a great episode. The series more feels like an extended movie than it does a TV series. We will likely be in the Second Act of the story in the next episode.