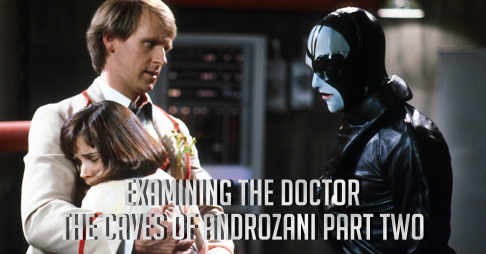 Peter Davison’s epic swansong The Caves Of Androzani is the focus of Examining The Doctor. Part Two finds The Doctor and Peri facing a Firing Squad (or does it?). Throughout the episode, the political struggle between Androzani Major and Androzani Minor is fleshed out, Sharaz Jek’s role is defined, and we get some wonderfully silly shots of The Magma Creature.

Still, despite the budgetary issues, the elements of greatness shine through in this second installment of what is now the Guinness Book Of World Records Holder as The Greatest Doctor Who Story Of All Time. Join Mark and Seth as they bring their trademark blend of knowledge and humor to this episode. It’s the audio equivalent of Spectrox.