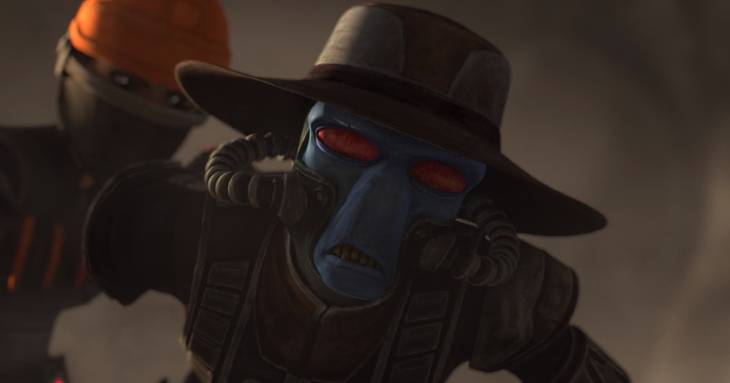 Last week’s episode left off on a bit of a cliffhanger with the capture of Omega. This week shows how the team will try to rescue her.

The episode begins in media res with Crosshair in hot pursuit of the team’s ship. Hunter reluctantly orders a jump to lightspeed to escape. While in hyperspace, Tech informs that group that Omega has direct first-generation DNA of Jango Fett, which makes her vitally important to The Kaminoans if they are to make any more clones. This explains why she has a bounty on her.

Cad Bane contacts the Kaminoan Prime Minister Lama Su and reports that he has Omega. Su arranges a meeting on Bespin where they can exchange her for his bounty reward. As Bane flies toward Bespin, Omega tricks his droid Todo into letting her escape. Her freedom doesn’t last long because Bane is able to apprehend her after she contacts the team.

Bane takes Omega to meet Taun We but find she has been killed by none other than Fennec Shand. The ensuing gunfight results in Bane’s reward credits getting lost into Bespin’s gassy atmosphere. Omega is able to escape again and Bane is knocked out.

While searching for a way to communicate with the team, Omega finds what looks like a cloning chamber. Soon after, she is able to send a signal for the team to come for her. Bane and Shand fight to a standstill over her possession. Omega escapes by launching herself in an escape pod. The Bad Batch manage to rescue her and flying to safety.

Shand contacts Nala Se on Kamino and reports that Omega is in the hands of team. However, Se tells her that as long as We doesn’t have her, she is safe and pays Shand anyway.