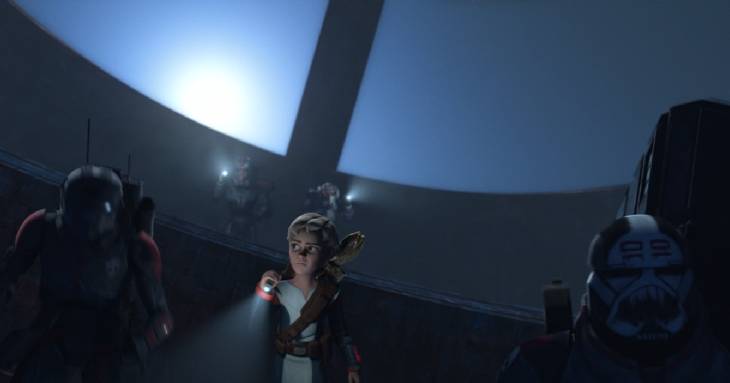 After several character-building episodes, we got one that was primarily action.

Crosshair reports to Admiral Rampart that The Bad Batch are on Bracca. Rampart orders Crosshair to terminate them. The Kaminoan Prime Minister Lama Su secretly reveals that they need a backup plan to counter The Empire’s increasing threat.

On Bracca, Wrecker trains Omega in bomb defusing. He and Echo are still crafty enough to notice they are being watched by some scrappers. They manage to knock the scrappers out presumably before any more word gets out. The team manages to scavenge a bunch of explosives and torpedoes of a crashed cruiser.

Crosshair and his men arrive on Bracca in search of the team. Crosshair immediately can tell scanners are being jammed, which means his old teammates know he’s there. He also correctly deduces that his comms are being tracked as well. It doesn’t take long before the two sides clash. The Bad Batch escape into the engine area.

Unfortunately, Crosshair is able to surround the team. Not only is their escape cut off, but the engines begin warming up. Tech realizes they have two minutes to blow their way out or be incinerated by the engines. Hunter orders charges detonated which blow the team away from the flaming engines. Crosshair himself is burned by the engine fire.

While everybody survives the fall, Hunter and Omega find themselves surrounded by dead Imperial troopers. Cad Bane steps forward and shoots Hunter. He then stuns Omega and runs off with her.

Hunter comes to and joins the rest of the team on their ship. He pleads with the others that they have to rescue Omega.

After several character-driven episodes, it felt like it was time for a god old action-packed episode. This delivered that in spades. It’s actually pretty impressive that they got so much into 22 minutes or so. Plus the cliffhanger of Omega’s capture is enough to keep me waiting for next week.