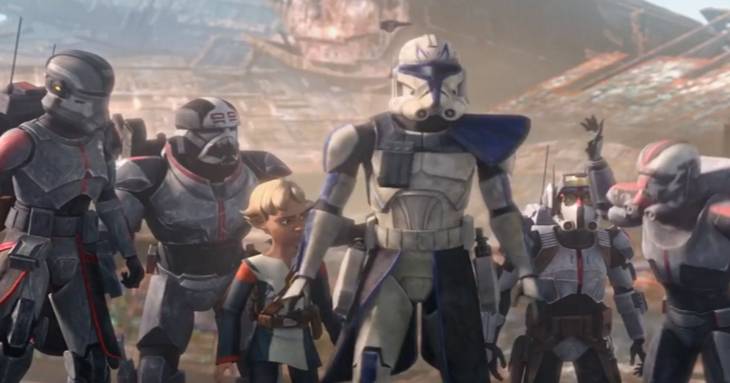 The team gets a visit from an old comrade.

Obligatory SPOILER WARNING! Do not proceed unless you want to know what happens in the episode.

This episode begins in media res with our heroes escaping a space battle. They deliver a pet lizard to Cid, who awards them a fraction of what the job said would pay. She explains that they owe her for docking fees, and a massive food bill getting racked up by Wrecker and Omega. Plus, Cid mentions that they messed up on last episode’s mission, so it looks like they came back empty handed after all.

The team gets an unexpected visit from Rex, who turns out to be the contact The Martez sisters were talking to. He notices Wrecker’s headaches and warns the team that they need to get their inhibitor chips taken care of.

A little while later, Rex has the team on the wreckage of an old Venator-class cruiser where he can remove the chips. Similar to how Ahsoka did it during Clone Wars. Unfortunately, the chip kicks in right before Tech is able to start work. He lashes out and takes the team down very quickly and is about to execute Omega when Rex stuns him from behind. Tech then gets to work removing the chips.

After everybody has their chips removed, Rex and Hunter say their goodbyes. However, a pair of scrappers see them and notify The Empire of their whereabouts.

This episode had a little bit of everything. It wasn’t the most action-packed episode, but it made up for that with the return of Captain Rex. Seeing a dianoga attack Wrecker was another fun throwback. It will be interesting to see whether Cid will sell out over the team or not. Something tells me she has a bit stronger of character than she leads on. It’s also safe to say that if we’ve seen Rex, then Ahsoka isn’t too far behind.