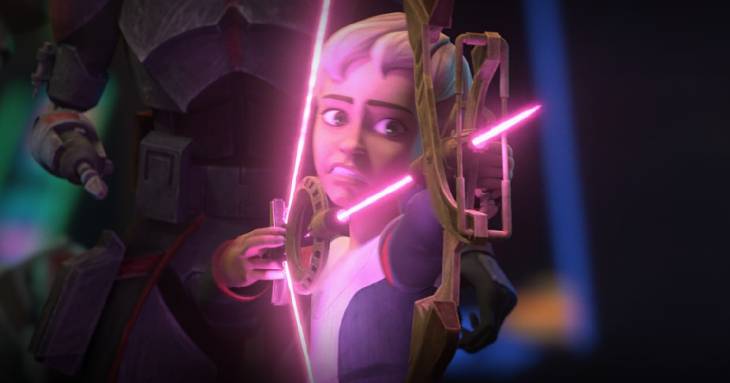 WARNING: There are SPOILERS within! Do not continue if you want to avoid spoilers!

Omega is training with her laser bow (lightbow?) when Cid gives the team their latest mission. They are to sneak into a Corellia decommissioning facility and retrieve the head of a tactical droid. The key word here is “gives” not “asks” or “requests”.

Everything goes well until the Martez sisters get to the droid head first. Rafa gets into a scuffle with Omega and the lightbow goes off, alerting the base. The two teams have a firefight with police droids and fight over possession of the head while Wrecker manages to hit his head (again) restarting the conveyors. He mutters “Good soldiers follow orders” as he passes out.

Trace and Tech activate the battle droids and have it order them to attack the police droids. Wrecker comes to and joins in the fight. Unfortunately, the head gets blasted and both teams have to go home empty handed.

Fortunately, Tech managed to copy the data from the droid’s head before it got lost. hunter decides to give it to the sisters since he knows it will be used for the right reasons. The sisters alert their contact via hologram communicator that they have the data and the location of The Bad Batch.

I know some fans will roll their eyes at the return of the Martez sisters, but I had no problem with it. My hunch is they are talking to Bail Organa or Saw Gerrera and this will be the first step to The Bad Batch joining the fledgling Rebel Alliance. The latter half of this episode was basically one big action sequence and it felt as Star Wars as you can get.

As for the mission outcome, it was not made clear whether the data rod Hunter handed off was the only copy or not. It would stand to reason if Tech could have made such a quick copy that a second copy could be easily made onto another rod or the ship itself. Not nly would that be a good plan for redundancy, it would also cover all sides since the team wouldn’t have to report back a failed mission.