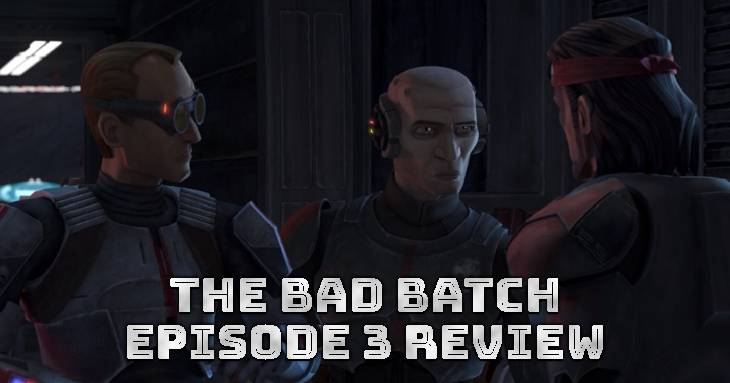 SPOILER WARNING: Do not proceed if you wish to avoid spoilers!

The Batch are still on the run after their escape from Saleucami and the ship is a little worse for wear. They fall out of hyperspace and crash land on a moon where they realize a power capacitor needs replacing.

Meanwhile, Tarkin and Crosshair oversee the recruitment of new soldiers. Tarkin is briefed by Admiral Rampart with a plan that clones could act as trainers to a new squad of soldiers dubbed Elite Squad. Tarkin sends the new squad off to wipe out Saw Gerrera’s camp as a test of their abilities.

The Batch commences repairs of the ship with several scenes that mirror The Empire Strikes Back. They track down a dragon that has taken capacitors from the ship for food. The creature tackles Hunter and escapes into a crater. Omega goes after it to retrieve the part.

The Elite Squad arrive on Onderon and find Saw Gerrera’s camp. Unfortunately for them, Gerrera is already gone. A squad member tells Crosshair they should take the camp back as prisoners. Crosshair responds by saying “good soldiers follow orders” and shoots him. He then orders the humans killed in cold blood. Upon their return to Kamino, Tarkin OKs the program of clones training humans. The Kaminoans secretly conspire to keep the clones at a higher level.

Omega tracks the dragon to its lair and is able to distract it with her flashlight. She grabs the capacitor and reunites with Hunter. All of the heroes regroup on the ship and blast off to safety

This was a near-perfect second act. Not only were there references to The Empire Strikes Back, but there were also enough seeds planted that will be harvested in later episodes. It’s becoming more apparent that Omega has each of the skills all the other Bad Batch team members have. In the last episode, she demonstrated accuracy with a blaster, despite never having fired one before. Then in this episode, she shows clever tactical ability on her very first mission. Some critics may say this makes her another “Mary Sue”, but I say if you’re genetically-engineered, that gives you an excuse to be a Mary Sue.

The growing distrust of The Empire by The Kaminoans was also fleshed out. It will be interesting to see if any “super-clones” will be engineered.