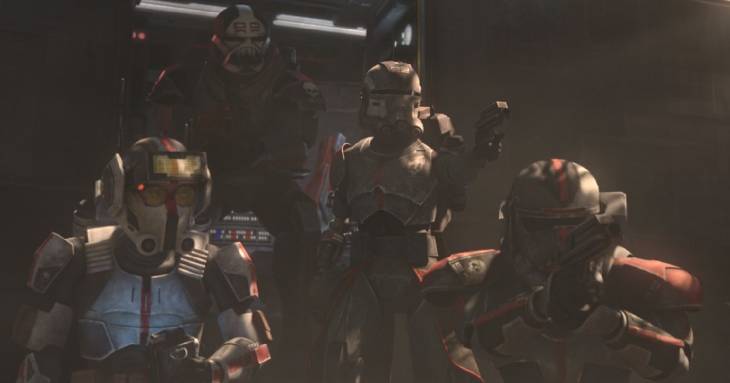 Imperial Captain Bragg addresses the crowd on the planet Raxus the former capital of the Separatists. She tells them that The Empire will treat all systems equally, which is why they are instituting a mandatory curfew. She then invites the planet’s senator, Avi Singh, to speak. Senator Singh instead tells the crowd that The Empire wants to intimidate them. He is promptly taken away and Imperial troops gather to herd the people away.

Back at Cid’s, The Bad Batch is given a new mission. They are to extract, you guessed it, Senator Singh. Since Raxus was a Separatist capital, Hunter is reluctant to take Omega there. Cid offers to keep an eye on her in the meantime. Omega helps Cid at holochess in the meantime.

The team goes to Raxus meets with Signh’s droid, GS-8, who takes them to the building where he’s being held. They sneak in and hack the security system to avoid being seen and use stun weapons to take down the troopers.

After freeing Singh, they steal a walker and try to escape the city. Unfortunately, they find themselves at a dead-end and surrounded by Imperial forces. Singh has them shoot a hole in the wall where they escape to their ship.

By the time The Batch make it back home, Omega has cleaned house at holochess so much that she paid off the debt they owe Cid. She and Hunter then sit down to have a friendly game as the episode ends.

Some people may look to this episode as being filler and I won’t argue against that opinion. That said, if you missed this episode, you didn’t really miss much with the possible exception of Singh’s rescue. Still, this was an entertaining episode that showed The Bad Batch have a merciful side to them by using stun weapons.