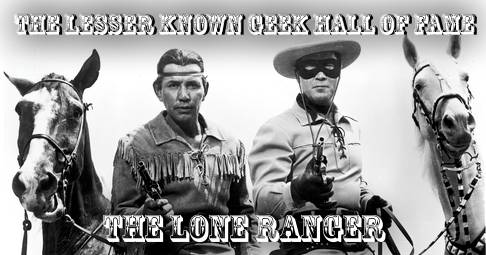 Hi-Yo Silver! The mysterious masked man who has been an icon to TV and radio has made his way to the Geekville Radio Lesser Known Geek Hall Of Fame!

Seth “Zandrax” Zillmann and “Crazy Train” Jonathan Bolick open the doors to the Hall Of Fame to answer those questions and more.

The story of The Lone Ranger starts in Detroit Michigan during the 1930s. George W. Trendle, a lawyer, businessman, and overall renaissance man had invested in several Nickelodeon and movie theaters. In fact, he co-owned about 20 movie theaters in the Detroit area. When competition started rising in the theater industry, he sold the theaters for apprimately six million dollars. That’s six million not adjusted for inflation. Six million in 1930 dollars.

After leaving the theater business, George invested in the radio business. He bought the CBS affiliate radio station WGHP, and changed it to WXYZ (“The last word in radio”). Radio was arguably the biggest entertainment media at the time, since the television would not become a mainstay for another decade or two.

Trendle knew he had to have programming. Radio plays were popular forms of entertainment, so it made perfect sense for WXYZ to have their own shows. Westerns were a popular genre, so the chances were good that a Western themed show would be a hit with audiences. However, he would need actors to perform the stories. But he wouldn’t be able to get actors to perform the stories if he didn’t have stories in the first place. And in order to have stories, he would need characters to write the stories about.

Enter Fran Striker, a writer from New York. He had actually written radio shows before, even some in the Western genre. Who exactly did what to create the The Lone Ranger can be debated, but the official credit goes to Trendle. Striker was then hired to write the episodes, a duty that Striker would continue for the next several years in many forms of media.

The rest, as they say, is history. Trendle went down in history as the creator of arguably the greatest Old West hero of all time. Striker would find steady work writing stories. And, most of all, fans would enjoy these stories on the radio, TV, print, even the movie theater.

What may surprise many people who may not know the full history of The Lone Ranger is his direct relation to another famous crimefighter who became an icon of his own.

And of course, there are the two failed attempts at relaunching The Lone Ranger as a feature film franchise. One of which was very controversial due to the treatment of the beloved actor synonymous with the role.

All this and more in a fun-filled podcast about the one and only Lone Ranger! Hi-Yo Silver! Away!