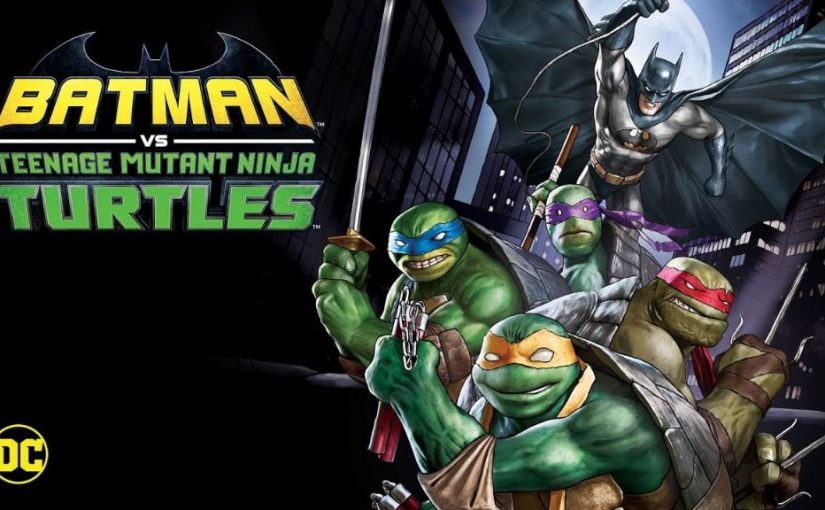 Batman and Teenage Mutant Ninja Turtles. Two franchises that have been around for decades and seen countless variations reach amazing levels of mainstream success. A meeting of the two seems like a natural step doesn’t it?

That’s just what happened in late 2015 when IDW joined forces with DC Comics to present the first official pairing. Two more crossovers followed, as well as an animated movie adaption.

I’ll still give a mild spoiler warning. I won’t give away massive plot points, but if you want to be completely spoiler-free read the comic and watch the video first.

Originally published as a six-issue crossover, Batman/Teenage Mutant Ninja Turtles saw the Turtles brought into the DC Comics world. Ever since DC vs. Marvel, it seems every crossover has to be done with the premise of one side coming from a different world.

Veteran Batman writer James Tyrion IV handles the story, with Freddie Williams II doing the artwork. The pairing absolutely works. Batman looks just as he always has, while the Turtles still manage to have the classic Mirage Studios look without feeling out of place next to The Dark Knight.

The premise is simple. Krang sent The Turtles, along with Shredder and his Foot Clan minions, to another world so he could be evil without their interference. See, in this incarnation, Shredder and Krang aren’t besties so they’re prone to sabotaging each other’s plans.

The rest of the story, for the most part, can easily be figured out. The two groups of heroes do not initially trust each other but learn to respect one another when push comes to shove. The interaction between Batman and Raphael is particularly good, given Raph is the hothead of his family and Bats has a history of dealing with hotheaded teenagers.

Currently, the complete story is available in an awesome hardcover collection that includes artwork from all the variant covers.

And yes, Batman does fight Shredder.

The Blu-ray adapts the first mini-series. However, the subplot of alternate worlds is left out, probably for simplicity’s sake. There are also characters in the comic that do not appear in the comic and vice versa. Plus the ending is completely different as it takes place at an Ace Chemical factory instead of Arkham Asylum like the comic.

The animation almost seems like a hybrid of Cartoon Network’s The Brave And The Bold crossed with the TMNT style of the early 2000s syndicated series. If you were hoping for a return to the 90s DCAU look, you might be a little disappointed*.

As far as the voice acting, none of the past TMNT voice actors reprise any roles. Fortunately, the actors who do appear perform the roles admirably and the voicing is top-notch as always.

That said, it really would have been that extra topping on the pizza to have the known voices like Rob Paulsen, Cam Clarke, or Kevin Michael Richardson in the mix. It’s very possible there are production reasons why it didn’t happen, but it still would have been cool.

Perhaps the biggest surprise is Troy Baker taking a shot as Batman. I have said before that I literally hear Kevin Conroy’s voice in my head when I read Batman comics. Baker has previously filled in for Mark Hamill as The Joker and pulled it off so well even Hamill himself was impressed. He manages the same feat here with uncanny accuracy to Conroy’s Batman.

While there is nothing shown explicitly, there is a good deal of violence in the movie. An example of this is when Shredder and Ra’s Al-Ghul infiltrate Arkham Asylum. A security guard is shown trying to stop them and you see a flash of a blade. Moments later, the guard’s severed hand is used to open the security door that leads to The Joker’s cell. Another is when Shredder kills by throwing a shuriken into the back of a head.

There is no word yet, as of this writing, whether there will be additional movies. Based on this first outing we certainly hope there will be. Each franchise still has villains that haven’t been used yet, and with two more comics stories, there are easily two more movies worth of material.

Now, how about that long overdue TMNT/Daredevil crossover?

*A separate comic, Batman/Teenage Mutant Ninja Turtles Adventures was produced specifically to use the DCAU Batman.