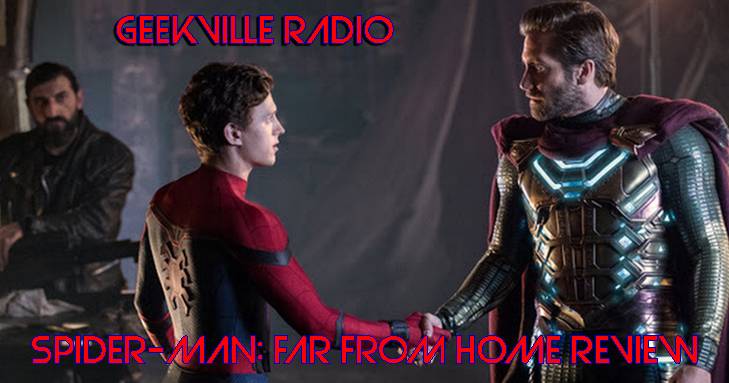 The final film in Marvel Phase Three was not Avengers: Endgame, but Spider-Man: Far From Home. It firmly established, in case there were any doubts, that people affected by The Snap did get a five year age difference. Plus, it featured the big screen debut of Mysterio, one of Spider-Man’s longest-tenured villains.

One thing I noticed when reading preview pages was the number of sites that didn’t seem to know the background on Mysterio. I’m not going to say names because I don’t want to hurt any feelings, but I would see websites speculate “Could this Mysterio be a hero?”. Anybody familiar with Mysterio in the comics knows that masquerading as a hero is what he does. Jake Gyllenhaal takes on a rare villain role but does play the “man out of place” facade very well.

As for the rest of the cast, all the major characters return. A few are recast due to the age differences caused by Thanos’s Snap, now called “The Blip” for the masses. The setting is eight months later, with Peter adjusting to life without Tony Stark.

A major plot point involved Peter being given special glasses worn by Tony in Endgame which had the latest JARVIS/FRIDAY type AI, EDITH (Even In Death I’m The Hero). This leads to a comedy segment where Peter accidentally sends death drones after a classmate.

Naturally, Peter, still unsure of his abilities, is hesitant to step up as a go-to guy for the Avengers. He willingly hands over EDITH, and thus all of Stark Technologies, to Quentin Beck, aka Mysterio, who uses them to wreak havoc in Italy. Why Tony Stark of all people wouldn’t have a failsafe on such a dangerous piece of technology is not explained. But that’s low on the list of questions in a world where half the population has to deal with losing five years of their lives.

Perhaps the biggest news coming out of the latest MCU offering wasn’t even in the movie itself but in the now signature post-credits scene. In it, we find that Nick Fury and Maria Hill are actually being impersonated by Jonas, the from Captain Marvel. Meanwhile, the real Fury is on board a spaceship somewhere else in the cosmos.

We speculated in our analysis of the final trailer that Mysterio not only was up to his usual trick of passing off as a hero but that he may be lying about coming from another world. Both turned out to be the case, as Gyllenhaal’s Quentin Beck harbored a deep hatred of Tony Stark for taking his tech, as depicted in Captain America: Civil War. Another one of his henchmen was the guy yelled at by Obadiah Stane for not being as good as Stark in the original Iron Man. Like Vulture in Homecoming, Beck’s team resented Stark and SHIELD for kicking them to the curb.

That brings us to one of the more puzzling elements of the last trailer. In it, Fury states that “The Snap” opened portals to other worlds. This line was not spoken during the film. The only mention of another Earth was during Beck’s introduction in the first act.

So why was this line cut? Was it simply for plot simplicity? Or was it a red herring to throw the audience off? After all, even if Beck was a fraud, a link to another universe would be a heckuva plot point to leave open. Especially since the epilogue showed that neither Fury nor Hill trusted Beck in the first place, even if it was their doppelgangers.

Another piece of news concerning cut footage is the lack of Michael Keaton’s Adrian Toomes/Vulture. While he did not appear in the trailers, he was credited on the film’s IMDB page. Ditto for Michael Mando’s Mac Gargan/Scorpion. The presence of these villains wasn’t crucial, but it would have been nice to catch a glimpse of them. After all, the natural progression would be to have some form of The Sinister Six in an upcoming movie. The villainous group would be half accounted for, assuming Beck’s death was a ruse. They even have a common cause: Hatred of Stark Industries, SHIELD, and Spider-Man.

Overall, Far From Home delivered on every major expectation. We got a faithful depiction of Mysterio as a villain who masquerades as a hero. We got further development in Peter’s relationship with MJ. We even got J Jonah Jameson, the biggest thorn in Spider-Man’s side, reprised by JK Simmons to boot!

The only thing that could be seen as a disappointment was in the soundtrack. Not the music by Michael Giacchino, that was top notch as usual. But we’ve now had our second Spider-Man movie with a Ramones song in it, and not the Ramones cover of the Spider-Man theme from the 90s.

2020 will see the dawn on Marvel’s Phase Four, and there are plenty of possibilities where things will go. Our next episode of Geekville Radio will dive into what we know and don’t know about Phase Four. 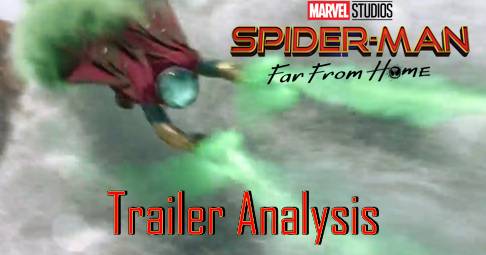 Sony released a second trailer for Spider-Man: Far From Home, which gives a little more of the story. That means it’s time to examine every frame of it so we can lay out what everything means and then get mad if it turns out to be something different.

So queue up the Spider-Man: Far From Home trailer and follow along!

Did we miss anything? Any other ideas? What did you think of this trailer?