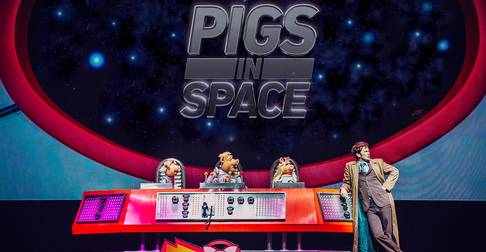 The Muppets recently had their live show at the famous O2 Arena in London England. Among one of the many sketches was Pigs In Space, a regular segment on the old Muppet Show. On this particular sketch, the crew of The Swine Trek encounter a certain Time Lord. Hilarity ensues.

Yes, it’s The Tenth Doctor himself, David Tennant. But if that weren’t enough, the sketch also ran with Tennant’s real life father in-law Peter Davison… who also happened to be The Fifth Doctor.

It’s also worth mentioning that former Doctor Who companion Kylie Minogue also helped in one of the musical acts, the famous “Rainbow Connection”.

Everybody attending seemed to love the show. Hopefully it sees some sort of official release.