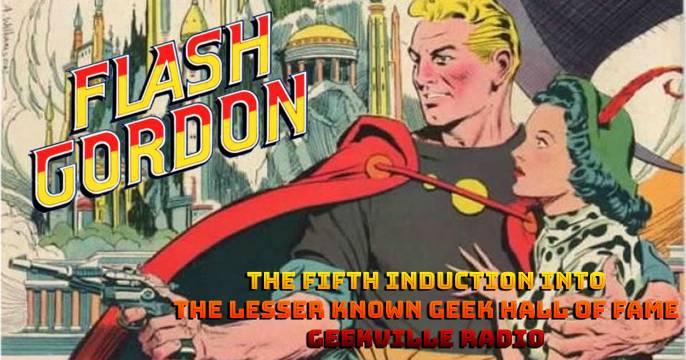 A lot of people have heard of Flash Gordon, but how much do they actually know? This is why we induct characters such as The Lone Ranger or The Phantom. Sure, the name is well known, but their influence over the genre is bigger and deeper than a lot of people realize.

Not only does Flash Gordon have a great hero and great stories it also has a great villain in Ming The Merciless. Given that Flash Gordon set the template for science fiction, and especially for Space Opera, we induct him into our Hall Of Fame.

One popular title that King did not publish was Buck Rogers. In fact, Buck actually predates Flash by a few years. King Features wanted a sci-fi hero to compete against the established Buck Rogers.

First, King tried to buy the rights to publish John Carter stories. When that deal couldn’t be made, King turned to one of their own artists, Alex Raymond. Taking a cue from the novel When Worlds Collide, Raymond created a strip that would have three main characters: The athletic hero (Flash), the girlfriend (Dale), and the scientist (Dr. Zarkov). In fact, that is a common trope to this day when it comes to sci-fi.

Alex “Flash” Gordon – Flash is the handsome athletic hero in the series. He is a professional polo player and graduate of Yale University. Flash is usually depicted as a swashbuckling action star who is never afraid to confront evil. Later adaptions have changed Flash’s athletic background to football rather than polo.

Dale Arden – The heroine of the series, Dale is always the one true love in Flash’s life. Her role can vary greatly depending on the adaption and writing. In the original comic, she had no given profession. Over the years, she has been a news reporter, a travel agent, a spy, and a highly trained scientist in her own right. One constant in all the is Ming’s desire to marry her.

Dr. Zarkov – Depending on the adaption, Dr. Zarkov’s first name is either Hans or Alexis. Either way, Zarkov is the scientist who discovers a rogue planet heading on a collision course with Earth. He enlists the help of Flash and Dale to save the world. Whether Flash and Dale go willingly or are kidnapped at gunpoint can also vary by adaption. Either way, Zarkov becomes a friend and heroic character over the course of the adventures.

Ming The Merciless – The constant adversary in all Flash Gordon adaptions, Ming is one of the more infamous villains in sci-fi history. He is the ruthless emperor of Planet Mongo who wishes to marry Dale Arden against her wishes. Ming is apparently killed several times over the years, only to return due to a pre-planned escape.

Vultan – Prince of his people, The Hawkmen, Vultan is a fierce warrior who sees the heroes as adversaries. However, his respect is earned when they save his people from destruction at Ming’s hands. In almost any iteration, he is a large man who has and a heart of gold.

Barin – Another prince of his people, Barin is actually the rightful ruler of Mongo. He usually is romantically linked to Ming’s daughter Aura, but their relationship can vary given the different adaptions over the years.

Aura – Ming’s daughter and the princess of Mongo. Her character can also vary based on the adaption and the writer. Most versions depict her being smitten with Flash. Earlier material shows her to be as nefarious as her father, while more recent takes have her in a more sympathetic role.

Thun – Like Barin and Vultan, Thun is the prince of his people. Originally depicted as a Lion-like species, he has been altered for other adaptions to be fully human. In any regard, he is one of Flash’s closest allies.

The first Flash Gordon strip was published in January 1934. Raymond was the only person credited for the strip, but he did have ghostwriters helping with the writing while he supplied the artwork. The initial story, which became known as “Flash Gordon On The Planet Mongo”, is what many of the subsequent adaptions have been based on.

Raymond was the main creative force in the weekly comic strips for approximately 10 years, from January 1934 – April 1944. A daily strip by Austin Briggs began in 1940. Briggs took over both strips when Raymond left King Features to enlist in the US Military for World War II. The comic strip would continue to run in some capacity for the next several decades. The daily strip ended in 1993. The Sunday strip ran until 2003 and featured comic book talents such as John Romita Sr., Al Williamson, and Joe Kubert over the years.

A radio serial was produced in 1935. For the most part, it directly followed the comic strip for its first year. After that, it strayed from the comics to tell original stories. It ended the following year after 60 episodes.

Flash Gordon was released in 1936 and mainly followed the story of the initial comic strip series “Flash Gordon On Planet Mongo”. The serial was a huge hit and launched Crabb’s career as an action hero. In 1996, the original serial was selected for preservation in National Film Registry by The Library Of Congress.

In 1938, a sequel Flash Gordon’s Trip To Mars was released. It was adapted from the comic story “Flash Gordon and the Witch Queen of Mongo”. Most of the original cast returned, including Jean Rogers as Dale and Frank Shannon as Zarkov. As the title implied, the story took place on Mars. This was a significant change from the comic, which of course was still set on Mongo. However, Ming was still the principle villain of the story, though he had devilish demeanor.

The third and final serial, Flash Gordon Conquers The Universe, premiered in 1940. Carol Hughes replaced Jean Rogers as Dale, while Middleton once again played Ming. This time around, Ming was portrayed as a brutal dictator, probably due to the world getting swept up in war.

All the serials were adapted for TV in the 1950s. To avoid confusion with the unrelated original Flash Gordon TV show airing at the time, the serial was renamed Soldiers.

Unlike all the other adaptions, this Flash Gordon had an entirely different premise. Instead of adapting stories from the comics, the series took place in the year 3203 where Flash and company travel through space on a rocket ship.

The show aired on the DuMont and was a modest hit. Many fans dismiss the series due to its deviation from material. However, there still are fans and critics who praise the show due to its depiction of Dale as an intelligent scientist as opposed to the stereotypical girlfriend in peril.

In 1979, Filmation produced an animated movie that retold Flash’s origin by blending elements of several comic stories together. This adaption was a period piece set in the early days of World War II, where Flash was an Olympic Gold Medalist, and Ming The Merciless worked with Hitler. It also had more adult themes such as alcohol use, scantily clad females, and sexual innuendos between characters. Thun famously said, “You have never loved until you’ve loved a lion woman with fur so soft”. When NBC execs were shown the movie, they liked but wanted it turned into a Saturday Morning series.

With the change to a Saturday Morning series came a different setting. Instead of taking place in World War II, it was set in the present day. The more adult-oriented elements were removed, and characters like Aura were toned down. The series went on to be regarded as one of Filmation’s best series. Each episode was a chapter in an ongoing story, complete with a summary of events in the opening moments, much like the original serials. It ran for two seasons and ended its run in 1981.

The cast was largely the same between the movie and the series. The two most notable changes were Alan Oppenheimer taking over Ming and Dr. Zarkov, while Alan Melvin replaced the late great Ted Cassidy as Thun.

In 1982, over a year after the series ended, the original movie was shown on NBC. It only aired and has never been formally released in the US. There have been releases in other countries, and various recordings of it are readily available online.

Thun in Flash Gordon: The Greatest Adventure Of All

This is the adaption modern generations are familiar with. It’s probably just as famous, if not more so, for the music soundtrack by Queen.

The film is a very loose adaption of the origin story. One change made was switching Flash from being a polo player to an NFL Quarterback. Thun, perhaps due to costume limitations at the time, was presented as human and not the half lion species depicted in the comics.

While the movie gained a bit of a cult following, it was not a box office hit. It grossed $27 million on a budget of $20 million.

Defenders Of The Earth

Marvel produced the animated series Defenders Of The Earth in 1986. It teamed Flash with fellow King Features heroes The Phantom, Mandrake The Magician, and Lothar. In this series, the setting was in 2015 and all the heroes had children who joined them in the adventures. The series ran for 65 episodes.

Defenders Of The Earth is, as of this writing, available on Amazon Prime.

In June 2019, news broke that Taiki Waiti is developing a Flash Gordon feature film for Disney. It will likely be an animated film.

Flash is one of the most influential characters in science-fiction. It is no secret that George Lucas entertained the idea of making a Flash Gordon film in the 1970s. When that couldn’t be done, he created something called Star Wars.

One of the things most famously adopted by Star Wars was the scrolling text to introduce the story. The serial episodes began with just that.

For more on Flash Gordon, check out the links below.

What characters would you like to see inducted into The Lesser known Geek Hall Of Fame? Sound off below or catch us on Facebook and Twitter. You can subscribe to us using your podcast device or computer to catch up on past inductees.