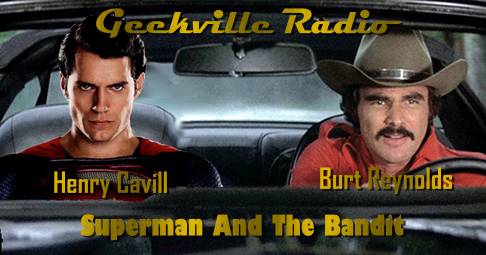 There are only two main subject in this episode of Geekville Radio, but they are real doozies. Seth and Crazy Train are joined by fellow Superman and Burt Reynolds fan David McKinney of South Atlanta Wrestling. The three talk the recent news about the potential departure of Henry Cavill from the DC Movie Universe as Superman, and the recent passing of Hollywood legend Burt Reynolds.

The Hollywood Reporter broke the news that Henry Cavill may indeed be leaving the role of Superman. Reports indicate that the hold up stems from negotiations to cameo in Shazam. Cavill had recently signed to appear in the Netflix series The Witcher, and sources told THR that scheduling would not permit Cavill from making an appearance in the film.

Another source, according to the report, stated the fallout may have happened due to a change in direction by Warner Bros.

“That’s because the studio has shifted its focus to a Supergirl movie, which will be an origin story featuring a teen superheroine. This effectively removes an actor of Cavill’s age from the storyline’s equation given that Superman, aka Kal-El, would be an infant, according to DC lore.”

“We have a great relationship and great respect for Henry Cavill that continues to remain unchanged. Additionally we have made no current decisions regarding any upcoming Superman films.”

Cavill has only responded with a video clip released to social media where he holds a Superman action figure.

All three panelists hold out hope that Cavill will appear in at least one more film before leaving, if he’s leaving at all.

Burt Reynolds passed away last week at the age of 82. Contrary to earlier claims, Reynolds was actually born in Michigan, not Waycross Georgia. Which means the icon of so many Southern flavored movies wasn’t actually Southern.

Seth, Train, and David all pay tribute and share memories from their favorite Burt Reynolds movies. Deliverance was a breakthrough leading man role, but it was his light-hearted car chase action comedies (Smokey & The Bandit, Cannonball Run) that became his signature genre in the 1970s. In the 80s he made more mature dramas and thrillers, such as Sharky’s Machine and Stick.

David talks about a story involving a young Reynolds and Clint Eastwood leaving their respective TV Western roles (Gunsmoke and Rawhide). Seth mentions a movie originally written for Reynolds that wound up going to Eastwood.

So, at the end of this episode, the panelists officially induct Burt Reynolds into Geekville Radio’s Honorary Southerners