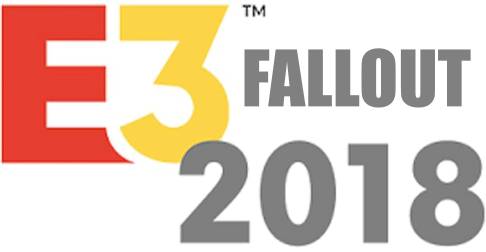 This episode of Geekville Radio has two main sections in News and talking the fallout of the 2018 E3 expo.

In DC Movie news, the working title for the second Wonder Woman movie is Wonder Woman 1984. Director Patty Jenkins tweeted this photo showing Chris Pine on the set as Steve Trevor. Could this be a decendant of the original, a la Lyle Waggoner in the TV series? Or could something more sinister be at work? And what of Lynda Carter herself?

The second part of the show is dedicated to news Seth and Train found interesting from E3. This is of course not an exhaustive or comprehensive list. We do recommend checking out our sister podcast You Just Got Fragged for a more in depth look at E3.

Perhaps the biggest Square Enix news is the official trailers and gameplay footage for Kingdom Hearts III. Clearly we see the addition of characters from Frozen, Incredibles, and Toy Story. Could we be seeing Marvel or Star Wars characters at some point? And what’s with a version costing over 200 bucks?

Also featured prominently was the Shadow Of The Tomb Raider trailer, which showed some very Batman Arkham style gameplay.

Crazy Train is ready for Assassin’s Creed Odyssey, which is set in Ancient Greece.

The Initiative, Undead Labs, Playground Games, Ninja Theory, Compulsion Games have all been acquired by Microsoft.

Fallout 76 E3 trailer showed the multi-player gameplay, to which Train and Seth both lament the potential aggravations from a primarily multi-player format.

Not one, not two, but THREE Gears Of War themed games in Gears 5, Gears Tactics, and Gears Pop.

The next entry in the Forza series, Forza Horizon 4

Also, Cyberpunk 2077 seemed to be a big surprise hit with fans

Last but not least, Seth in anxious to see what the relaunched Battletoads will look like.

A teaser trailer for Destiny 2 expansions, which includes the new Gambit Mode. As well as a story trailer that depicts the death of fan favorite Cayde 6.

Super Smash Bros. is back, and this time sports every character from every previous game.

And, of course, the news about Red Dead Redemption 2 is that there is no news.

Is there any game you liked that we didn’t mention? Let us know!