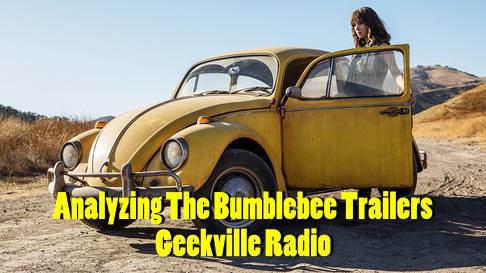 Not one, but TWO trailers for Bumblebee, the latest Transformers feature film, have been released this week. Unlike all previous live action entries, this movie looks to be directly inspired by the original 1980s toys and cartoons. The original classic Transformers era has since been branded Generation 1, or G1 for short. We have listed the time codes for all the points of interest in these trailers. If you see something we don’t, don’t hesitate to let us know!

:11 Charlie Watson introduced. Now I may be wrong here, but to dust of some Transformers Geek Cred, there was a human girl in the original cartoon named Carly. She is Spike’s girlfriend, and in Transformers The Movie and Season 3 of the series, they are married. Perhaps coincidentally, there was a Carly in the third Bayformers movie, portrayed by Rosie Huntington-Whiteley.

:15 Charlie finds Bumblebee in the junkyard.

:21 She is given the car by Uncle Hank for her birthday (Len Cariou).

:25 She drives Bumblebee home, presumably without license plates or registration, but let’s suspend a little disbelief.

:27 Then a piece of Bumblebee, perhaps an arm, since that’s about where his arm would be while transformed, falls to the floor

:30 She shines a flashlight into Bumblebee’s eyes, and he transforms into his robot form

:54 Charlie’s voiceover says humans can be terrible about things they don’t understand, while military humvees shoot at Bumblebee. We also see a determined John Cena, aka Agent Burns. This possibly implies that Burns may be an antagonist. There is the theory that this may be a backdoor into another GI Joe movie, but I don’t recall any Joe named Burns. That’s not to say it can’t be, just that there wouldn’t be an established character from the 80s named Burns.

1:05 Airplane and a Huey Cobra helicopter fly  but they turn out to be Triple Changers.

1:13 The red transformer talks to the military about a criminal, presumably Bumblebee. Which would make these characters Decepticons

1:15 A round pod is shown escaping from Cyberton. So perhaps Bumblebee is similar to Superman in fate.

1:23 Hailee asks Bumblebee if there is any family, Bumble points at her. This implies Bumblebee may not have any memory of his life on Cybertron, or the war with Decepticons.

1:33 Shockwave surrounded by what looks like Starscream and other Seekers. One of which could be Skywarp.

1:34 We see some transformers turning into jets on Cybertron

1:36 Agent Burns is shown stating that he sees firsthand what these things really are. Again, it’s a little open ended, where we don’t know if he trusts Bumblebee or not. He could be an antagonist, he could be helping the heroes. We just can’t tell yet

1:37 We see another jet transforming, and it looks like judging by the colors, it’s Starscream. And he looks like he’s a Harrier jet.

1:45 G1 Soundwave ejecting Ravage! I’m curious what Soundwave will transform into. Since the gimmick in the 1980s was a tape deck that would somehow change size.

1:47 Prime says you must protect earth and its people. Again, sounds like Bumblebee is getting the Superman storyline. which is not a bad thing.

1:56 Bumblebee puts on his battle mask look, and fires an arm canon.

2:00 A collapsing building on what looks like it’s on Cybertron. And is that Starscream again?

2:03 Another Harrier transforms. Could be Dirge, or even an Autobot like Powerglide if we’re going to have Autobot jets.

2:07 Starscream flying with Bumblebee by the throat. Reminds me of Thor vs. Iron Man in the first Avengers.

2:09 The military  surrounds a fallen Bumblebee. Could he be taken captive?

2:12 Bumblebee fights with a Decepticon

2:22 And finally some humor to end on a funny note.

This one seems to have more plot

0:00 Looks to be a longer shot of Starscream transforming from the last two trailers. And Starscream grabs Bumble be the neck. Links to that scene from 2:07 in the previous

:11 Starscream drops Bumblebee off a cliff, where he seemingly learns how to change into a VW beetle before passing out. So all those scenes of Starscream and Bumblebee fighting each other look to happen at the beginning of the movie, or at least chronologically before he meets Charlie.

:30 Variant scenes of Charlie driving Bumblebee home and meeting him. It looks like Charlie coins the name Bumblebee.

1:09 Charlie tries to repair something in Bumblebee, and uncovers the message of Optimus Prime giving his pep talk.

1:17 Some other shots that were at least partially used in the last trailer, including Prime on Cybertron and the Decepticons meeting the military to warn about Bumblebee.

1:36 A huge explosion to remind us Michael Bay is still involved with this film.

1:49 Prime gives the designation “B127”, rather than Bumblebee. This makes sense in the end because what are robots on an alien world going to know about Earth bees anyway?

1:55 Bumblebee flees from the military.

2:02 Some additional footage of Bumblebee fighting the Huey Cobra Decepticon.

2:11 More footage of Bumblebee, well,  bumbling around the house. Still funnier than the pot brownie jokes from Revenge Of The Fallen.

Did you catch anything we missed? Anything else to add? Sound off below, or hit us up on Facebook and Twitter!