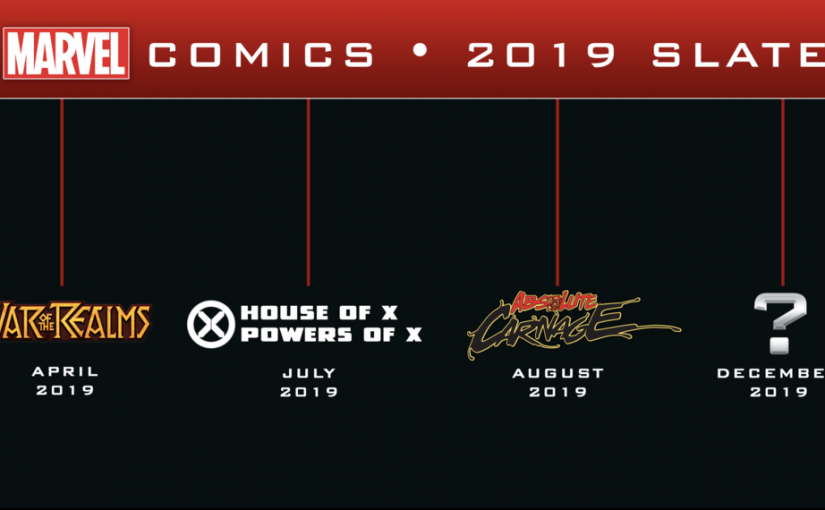 At C2E2, Marvel unveiled their upcoming major storylines that will take place in 2019.

The major universe-wide crossover is called War Of The Realms. As the name implies, it is all 10 Asgardian Realms. The last one left is Midgard, aka Earth. This may be an attempt to put Malekith on the level of a Dr. Doom or Kang, as he will be the central villain.

Every few years, Marvel does something to refresh the X-Men franchise. This summer brings two new X-Men titles, House Of X, and Powers Of X. Both set to be written by Jonathan Hickman.

As usual, Marvel was tight lipped over what will happen, but the presentation did have an interesting piece of art showing many characters from, as they put it “Past, Present, and Future”.

Yes, Cletus Kassidy is back from the dead… again!

This time around, Carnage is hunting down everybody who has EVER used a symbiote suit. This means not just Peter Parker, Eddie Brock, or the other usual suspects. Even The Guardians Of The Galaxy, Deadpool, and dinosaurs are potential targets.

Admittedly, I could only think of about 20 off the bat, but there were others who fit the bill of using a symbiote

I’m curious how Carnage would last against those last two, wince their cosmic level characters

Not only that, the special variant covers seem to imply other Marvel heroes may bond with symbiotes. Including Captain America, Black Panther, and Thor.

As discussed, I attended C2E2 with Clint from Geek Dig Podcast, and Joe from Beside The Point.

And Norko from The Wrestling Brethren Podcast did have this unintentionally hilarious post due to Autocorrect.