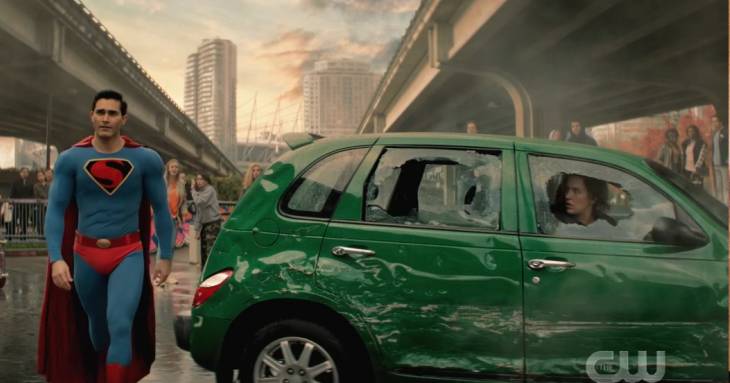 A summary of Superman’s origin. For the three or so people out there who may not know it already…

The first half or so is a flashback, beginning with a teenage Clark forming The Fortress Of Solitude at the North Pole. It then quickly covers his past through the birth of Jonathan and Jordan. However, the flashbacks have been brought about by Morgan/Tal-Rho scanning Clark’s mind. Tal threatens to expose that Superman has a family unless he joins him.

Meanwhile, in Smallville, the Kents and the Cushings make up with each other… which also consists of Jordan getting to make out with Sarah.

Suddenly, Tal shows up, threatening to kill Lois. Supes arrives just in time to save Lois. Tal promises Supes that the family will be unharmed as long as Supes stays with him.

We then see a flashback to a teenage Tal taking with a hologram of his own father. Unlike Jor-El, Tal’s father is a ruthless unloving parent who puts his son through torture. Them in current time, Supes gets subjected to the torture himself. As Supes recovers, eyes turning red, Lois calls John Henry Irons and tells him that she fears Superman has been turned.

Most of this episode felt like filler because it retold Superman’s origin for the 573rd time. We only got about 10 minutes of new story details. I’m fairly confident that Supes will outsmart Tal and find another way.