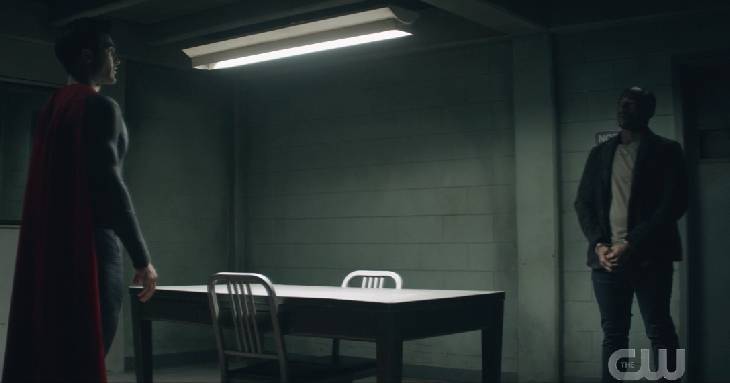 After a one-week gap, we are finally going to see the follow-up to John Henry Irons’s reveal last episode.

SPOILER WARNING! Do not proceed if you want to avoid spoilers !

Supes meets with Irons, who refuses to reveal any more of his plan until he talks to Lois. Meanwhile, Lois and Jonathan out about the history between John and Lois from their Earth. But when Jonathan is nearly killed after triggering a defense mechanism, the tension grows within the family.

An Army soldier who was secretly given x-kryptonite takes Irons from custody. Before long the entire base is on lockdown. The soldier uses kryptonite gas to get the upper hand in the fight. Irons kills the soldier with a kryptonite blade and sets his sights on a prone Supes. Fortunately, Lois arrives just in time to stop him.

Supes realizes that what is happening on his Earth is also what happened on Irons’. He lets Irons go free as a show of trust. The episode ends with Irons driving away from Smallville.

This was a step down from the last episode. But since the last episode was one of the best ones, that’s not a negative thing. I’ve always figured that Irons would be a good man in the end, even when we only knew him as a Luthor. Hopefully, we’ll see him in full Steel armor by the end of the season.