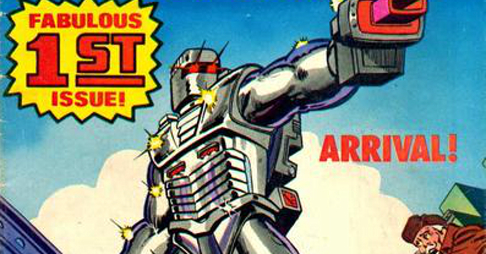 In 1979, Parker Brothers were trying to market a new sci-fi action figure. Rom The Space Knight was a large figure by today’s standards, standing in at a whopping 13 inches. Even by 1979 standards it was big. Most Mego figures stood at 8 inches, and the average Barbie was 12 inches.

The figure came with several accessories. Pictures courtesy thefwoosh.com. These accessories included Rom’s main weapon The Neutralizer, which opened a portal sending the evil Dire Wraiths into Limbo. Rom’s Translator allowed him to understand any language, and his Energy Analyzer helped him detect Good and Evil. Don’t sweat the details on how an Energy Analyzer detects an alingment. This was for kids during The Carter Administration.

Parker Brothers tried to expand the appeal of the figure by reaching out to Marvel Comics. The result was a modest success. The title ran for 7 years, 1979 – 1986. Rom also enjoyed inclusion into the regular Marvel Universe, as he met Marvel standards like Hulk, Colossus, and Wolverine.

Sadly, Rom faded into obscurity in the mid 1980’s, however ardent fans can rejoice because IDW Publishing has Rom #1 on the comic shelves as we speak. And Rom may even see the light of day in a Paramount movie universe alongside GI Joe, Transformers, MASK, and Micronauts.