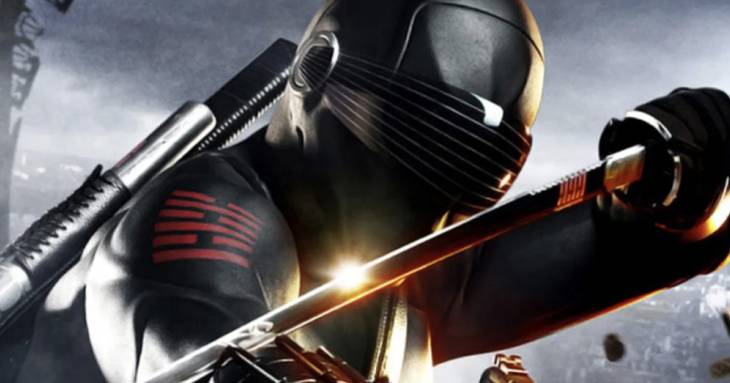 Paramount released a brief teaser for Snake Eyes: G.I. Joe Origins last month. The first full-blown trailer was released today and it finally gave us a look at the plot as well as the characters.

Paramount released two G.I. Joe movies to a mixed response. This movie is the first in what Paramount hopes will be a successful reboot of the franchise. Several classic characters can be seen in the trailer, most notably Scarlett (Samara Weaving) and Baroness (Ursula Corbero).

By the looks of the trailer, Snake Eyes works at a seafood butcher shop. His friend Storm Shadow (Andrew Koji) runs afoul of a mob. Instead of executing him, Snake Eyes (Henry Golding) helps him escape. Storm Shadow then enlists Snake Eyes into his ninja clan. Somewhere along the way, Scarlett and Baroness cross their paths.

This origin is a bit different from the original story from the 80s, but there is still plenty of room for a modern take with a lot of similarities. In the comics written by Larry Hama, Snake Eyes, Storm Shadow, and Stalker were all part of the same unit during The Vietnam War. After the war, Snake Eyes joined Storm Shadow in The Arashikage Ninja Clan. Snake Eyes shows better fighting skills than Storm Shadow which gains some favor from the clan leader The Hard Master. The Hard Master is murdered via an assassin’s bow. It was believed that Storm Shadow was the assassin, as he was a proven marksman with a bow and arrow. However, The Soft Master believed that Storm Shadow was trying to kill Snake Eyes out of jealousy.

No matter what happens, it’s a pretty safe bet that the movie will end with Snake Eyes disfigured and his old friend Storm Shadow now a sworn enemy.

Snake Eyes himself, Henry Golden, hinted that there could be at least two more movies that could be made out of this one. Given that we have Baroness, it would stand to reason that Destro isn’t too far behind. Stalker is not credited in the film, and while that doesn’t mean he won’t appear at all, it would seem to imply him not being a factor in this version of the story. It’s also possible Storm Shadow could take center stage in his own film, should it tell the story of him tracking The Hard Master’s killer.

Paramount has been rumored to be developing GI Joe and Transformers in a big screen shared universe. Even if that doesn’t happen, there probably will be a full-fledged GI Joe vs. Cobra film that would have the characters introduced in these other stand-alone stories.

Snake Eyes: G.I. Joe Origins is set for a July 23 release and is directed by Robert Schwentke (Red, R.I.P.D).