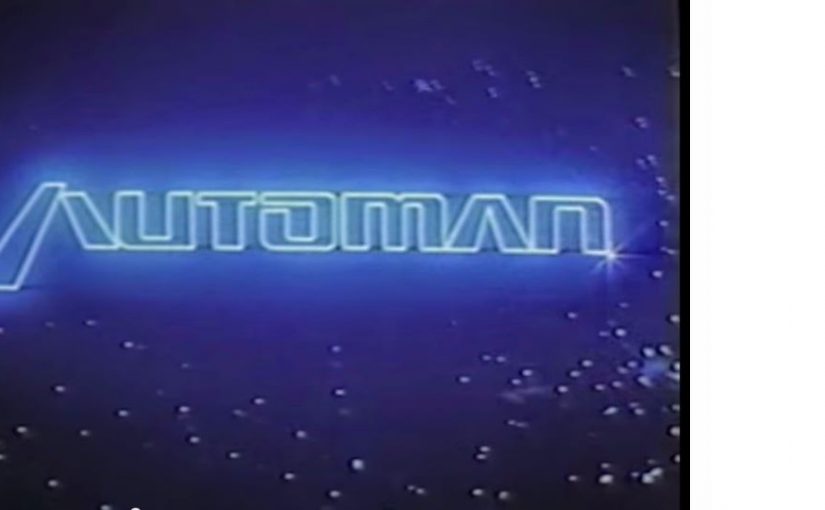 HEY KIDS! It’s Saturday! Time for another edition of Sci-Fi Saturday. Each week we will take a look at a certain possibly lesser-known piece of Sci-Fi lore. It could be a movie, TV show, book, video game, or even a specific character. The goal, as usual, is to educate and hopefully entertain.

In 1982, Disney released the groundbreaking film Tron. As with many innovations in entertainment, it inspired many similarities or “knock offs”. One such inspiration was the TV show Automan, which ran for only a half season on ABC. Premiering in December of 1983, it was in simple terms an inverse of Tron. Instead of a human entering the computer world like Jeff Bridges did, it was a computer creation existing in the real world.

Automan told the story of Walter Nebicher, who inexplicably was both a computer programmer and police officer. His best creation was Automan, a humanoid shaped hologram that could exist in the real world. Automan’s best tool was Cursor, which could create holographic objects such as vehicles and equipment. Kind of like a Green Lantern. Only Blue. And without a ring…

In most cases, Automan and Walter would use a Cursor created car that resembled a Lamborghini Countach with neon lights. It would travel at ridiculous speeds with precision handling. Somehow the physics and G-Forces were nonexistent when inside the car, because anybody riding in the car seemed unaffected by high speed turns.

Cursor could also create flying vehicles such as helicopters and planes. Really, Cursor was the MacGuffin that could just make whatever was needed for a cool scene.

When in danger, Automan could “combine” with Walter, essentially making himself into a forcefield forWalter’s protection. Automan and Walter would share conscience during this time, though it was unclear if this was any limit to how long this could be done.

Like most 80s action shows, episodes dwelled around crime fighting, solving murder plots, or exposing corruption. The villains were usually mere mortals, so it was difficult to truly believe the heroes were in peril when they had a device that could create anything. But hey, it was the 80s. Computers were a relatively new and exciting world that the average kid didn’t really understand yet. If you were able to suspend disbelief for the sake of sci-fi silliness, Automan was an enjoyable romp.

The entire series of Automan is available on DVD.