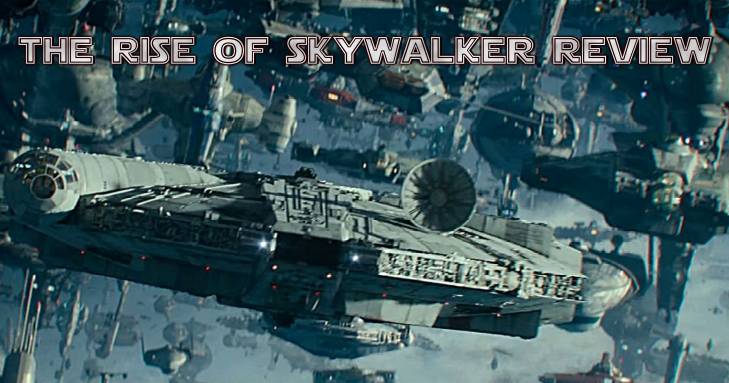 Well, it’s finally here, the end of “The Skywalker Saga”. Or as others still call it, Star Wars. In case you’ve been frozen in carbonite for the last year or two, Disney announced that Episode IX: The Rise Of Skywalker will be the last film with the proper episode titles established in 1980. More movies will be made, but those will explore new stories and new characters.

Enough with the history lesson, let’s get to the meat of the film. This meat will be sprinkled with a light spoiler sauce that has half the calories of regular spoilers. In other words, a few spoilers, but nothing major. If you don’t want ANY spoilers, turn back now. More thorough spoiler-packed reviews will be in upcoming podcasts.

In short, this was what I was hoping for in a Sequel Trilogy film. There were new planets, ships, and locations while still keeping what makes a Star Wars film feel like a Star Wars film. If you’ve seen all the trailers and TV spots, you get the overall premise of the movie with the return of Palpatine. However, the trailers do not reveal how it happens, and I will leave that explanation for the movie itself.

Some of the reviews have criticized “fan service”, which I don’t quite understand. If you are winding up a nine-film story about The Skywalker Family, bringing things full-circle seems like the natural thing to do. There are a few unnecessary things, such as another return to the holo-chess game on the Falcon. But other things that absolutely deserve to be done, such as a brief scene on Tatooine.

And yes, to address the bantha in the room, the movie does change some of the factors set in motion during The Last Jedi. However, it does so without hurting the effect of that story either. I won’t divulge any details, but everything about Rey’s origin still makes sense. Though, as a certain Jedi Master would say, from a certain point of view.

If you felt jaded from The Last Jedi, I think The Rise Of Skywalker will mend that fence. If you loved The Last Jedi and don’t want to see it forgotten, I think you can settle those fears as well.

Carrie Fisher’s final appearance was also a fitting farewell to her most recognized role. Leia’s screen time is probably a little less than what she had in The Force Awakens. Billy Dee Williams’ return to Lando Calrissian fits perfectly for his role in the film. Plus, there are other surprising, yet welcome, cameos along the way.

One valid critique of the film is the amount of content. There is a lot of fast-paced action that at times makes the movie feel like a highlight reel. However, at least with this being the third film of a trilogy, we are familiar with the characters. So cutting to the chase isn’t confusing as it could be if this was the first film.

The Bottom line, The Rise Of Skywalker delivers on what it was designed to be: the conclusion of a story told in three trilogies. If Disney changes their mind and there is Episode X, it will have a fresh canvas to work with.