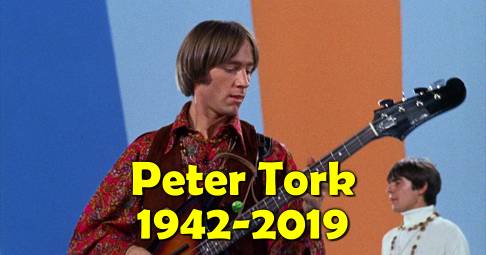 One of the biggest pop culture icons of the 1960s has lost another member. Peter Tork, the onscreen bass player for the made-for-TV pop group The Monkees, passed away this week. He was 77.

The following is taken from our Monkees Tribute Show we did last week.

Born in Washington DC in February 1942, Peter was the oldest of the four. Tork wound up playing the “straight man” of the group, and would often be setting up the jokes rather than making them himself. His father was a college professor, and Peter himself has always been a bit of an intellectual.

He started playing piano at age nine, and went on to learn several other instruments. While he was a young man, Peter befriended then aspiring musician Stephen Stills, mostly known for Buffalo Springfield, and being the Stills in Crosby, Still, Nash, & Young. As luck would have it, Stills had auditioned to be a Monkee before Peter knew about the opportunity. Stills was rejected due to not being photogenic enough for TV. Stills then recommended the creators look at Peter Tork. “And the rest” Tork would say “is a hysterectomy”

In a bit of irony, Tork may have been the one with the greatest amount of musical talent. Yet onscreen he was cast as being a bass player. Plus, his role in the show was more of a straight man who could be fooled, despite being a real life intellectual.

Tork is probabably the one that sang the least often. In fact, only one Monkees song from the original run featured Peter on lead vocals. That being “Your Auntie Grizelda” off the second album More Of The Monkees.

That said, it’s worth noting that Peter did help write a few songs. Most notably “For Pete’s Sake”, which became the TV show’s closing theme music, though it’s commonly misidentified as “In This Generation”.

He also did the music arrangement for arguably their biggest hit, “Daydream Believer”.

We here at Geekville Radio extend are deepest condolences, thoughts, and prayers to Peter Tork’s family and friends in this time of grief.