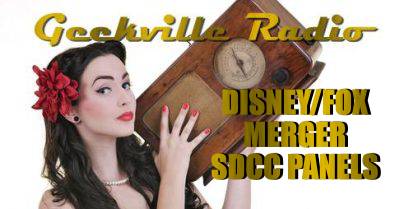 One of the biggest stories in all of geekery finished another chapter. The merger of Disney with 20th Century Fox properties has been approved by stockholders. This brings us another step closer to Disney having control of Fox material. This has obvious effects on two major properties

In other Star Wars news, Lucasfilm has officially announced that Carrie Fisher will be appearing in Episode IX via unused footage from The Force Awakens. Plus, two more names have been announced in Richard E Grant and Naomi Acke.

And of course, Episode IX looks to be the final Star Wars movie in the Skywalker saga. Does this mean the end of the “Episode Format”?

AMC has reinstated Chris Hardwick as the host of Talking Dead, after being suspended last month. Plus, Disney has fired director James Gunn from Guardians Of The Galaxy Vol. 3.

The second half of the show is devoted to panels from San Diego Comic-Con. Mainly the Arrowverse shows, but there’s a little bit of Wonder Woman and Shazam talk. The panels are linked below

Are there any panels that interested you at San Diego Comic-Con? Sound off below!