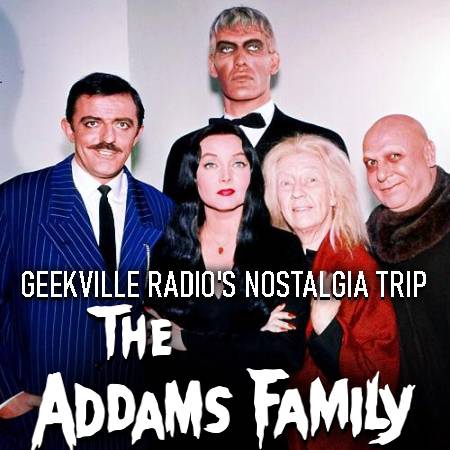 Halloween month is here so it is once again time for our annual Halloween sampler. Last year we spotlighted The Munsters. This year, we look at the other mid-60s monster family sitcom, The Addams Family, which ran on ABC for two seasons from 1964-1966.

The basis for the TV show was a series of comic strip panels created and drawn by Charles Addams. Contrary to popular belief, the strip was not called The Addams Family, nor were any of the characters even named. Not only that, the vast majority of Addam’s cartoons didn’t even have the characters in them.

While there have been many versions in various media over the years, the classic TV show is probably still the most identifiable one. It ran on ABC from 1964 to 1966, the same years as CBS’s sitcom The Munsters. In fact, The Munsters was created in response to The Addams Family.

One thing the two families have in common is they are both loving families who always try to be friendly with others. likewise, they seem oblivious as to why people react with fear or confusion around them. However, unlike the Munster family, the Addams aren’t monsters. They are a family that happens to have bizarre tastes and an appreciation for dark macabre things.

Television producer David Levy approached Addams about adapting some of his creations into a TV show. Addams was given the freedom of naming the characters and fleshing out their personalities. While he was not credited with writing particular episodes, he was very involved with the creative process. Including many of the gags and quirky scenes that the show became famous for.

Morticia Addams (Carolyn Jones) – The mother in the family and arguably the most recognizable character of the show. Much like the similar but unrelated character Vampira, Morticia has jet black hair and wears a black dress. Her maiden name is Frump

Gomez Addams (John Astin) – Gomez is Morticia’s husband and the father of their children. He often wears pin-striped suits and smokes cigars. One of Gomez’s favorite hobbies is building model train sets simply so he can blow them up with dynamite.

Pugsley Addams (Ken Weatherwax) – The elder of the two children who occasionally engage in secular activities. These activities would seem normal to the average person, so naturally, the family gets concerned whenever this happens.

Wednesday Addams (Lisa Loring) – The younger of the two children. Wednesday is good-hearted, despite her interest in things like spiders and reptiles. She often plays a much bigger role in future incarnations.

Lurch (Ted Cassidy) – Lurch is the giant but faithful butler. He usually speaks in phrases or short sentences. Cassidy’s 6’9″ frame made it easy to believe that Lurch had superhuman strength.

Thing (Ted Cassidy) – Cassidy often did double duty as Thing, a disembodied hand that somehow is still sentient. Thing often brings the mail in from the household mailbox, and can somehow instantly appear in different areas of the house within seconds.

Uncle Fester (Jackie Coogan) – Fester is eccentric even by the family’s standards. He is usually energetic and happy. He also enjoys explosives much the way Gomez does.

Grandmama (Blossom Rock) – The quirky mother of Gomez who has a collection of various knives and axes. She also practices witchcraft and potion-making.

It’s one of the most identifiable theme songs in TV history. The iconic music was written and performed by Vic Mizzy, who made several other theme songs throughout his career. Among his famous compositions include the Green Acres theme. Train calls him the Mike Post of the 1960s.

The main instrument used in the melody is a harpsichord, though a clarinet is heard in some riffs. Ted Cassidy adds his voice for the words “neat”, “sweet” and “petite”. Perhaps coincidentally, Lurch is often depicted as playing the harpsichord during episodes.

While we’re mainly focusing on the classic 60s TV show, we should mention the multiple reunions and remakes that happened over the years.

The New Scooby-Doo Movies – The Addams Family were the guest stars of the first season of The New Scooby-Doo Movies in 1972. Most of the cast reprised their roles for the episode, though Pugsly, Wednesday, and Grandmama were recast. A young and then-unknown Jodie Foster voiced Pugsley. The episode was also used as a backdoor pilot for an animated revival series. It still airs from time to time on cable, the episode was never released on home video due to rights issues with the Addams estate. We do a rundown of Scooby-Doo in one of our early Nostalgia Trip episodes.

The Addams Family (1973) – While most of the cast returned for the Scooby-Doo episode, only two were involved in the Saturday morning cartoon version. Ted Cassidy reprised the role of Lurch along with Jackie Coogan as Fester and Foster as Pugsley. The show only lasted one season and ended after 16 episodes.

Halloween With the New Addams Family (1977) – Most of the cast reprised their roles for this TV-Movie. It was the only live-action reunion of the cast, and the only time the original cast was filmed in color.

The Addams Family (1991) – The next big revival was a feature film directed by Barry Sonnenfeld. While the film was popular, some critics noticed changes to the characters. The most notable was Christina Ricci’s star-making performance as a much more morbid Wednesday. It spawned a sequel, Addams Family Values, in 1993

The Addams Family (1992) – The second animated incarnation fared better than the first since it lasted for two seasons. It was produced to capitalize on the popularity of the feature film. Astin was the only original actor to return. The character of Wednesday was brightened up, probably because it would be hard to make such a dark character on a Saturday morning cartoon

Addams Family Reunion (1998) – Another remake with an all-new cast. Most notable was Tim Curry as Gomez

The New Addams Family (1998) – This cable TV remake completely recast all the characters. John Astin did appear as a new character, Grandpapa Addams.

The Addams Family (2019) – The first animated feature film was different as the character were drawn to more resemble their original comic strip versions.