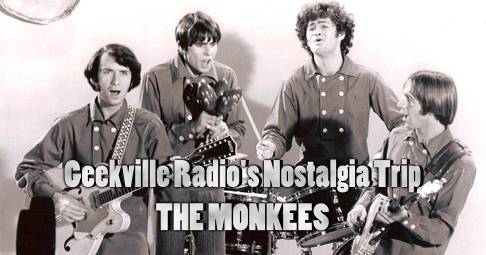 This edition of Geekville Radio’s Nostalgia Trip is devoted to the 1960s pop sensation The Monkees. While the TV show may have only lasted for two seasons, it has been revered for generations as an inspiration for mixing music, video, and comedy. It also enjoyed years of success in syndication.

The Monkees were a made for TV band in 1966, partially in response to BeatleMania and the successful movie A Hard Day’s Night. They were all cast and given band member roles by the studio. They were not a band that formed organically. As such, there have been misconceptions and misinterpretations about the group over the years. This show hopes to straighten out some of those misconceptions.

Micky Dolenz – Born in LA in 1945, he grew up in an entertainment family. Micky broke into showbiz at the age of 11 when he starred in a children’s show called Circus Boy under the name Micky Braddock. While he could play guitar, he wound up being cast as the drummer for the TV show. Due to a medical condition, he set up his drum kit in a unique way. The bass pedal was set up for left-handed playing, while the rest of the kit was set up for playing right-handed.

Dolenz could also be considered the one that stayed the most active after The Monkees broke up. He did continue acting and making music. in the 1970’s Micky auditioned to be Fonzie before the role was given to Henry Winkler.

Perhaps his most known role outside of The Monkees is the voice of Arthur from the original 1990s animated series The Tick.

Davy Jones – The youngest of the groups, born in December 1945 in Manchester. Arguably the most popular, especially with the ladies. He usually wound up singing the romantic ballads as a result. Usually depicted onscreen as a percussionist, carrying a tambourine or maracas.

Davy did have some measure of fame before being cast in The Monkees. He was a professional singer who had received awards for live musicals. He also appeared on the very same episode of The Ed Sullivan Show that introduced The Beatles.

Jones will probably be best remembered for singing what may be The Monkees’ biggest hit, “Daydream Believer”. That appeared on the fifth and final album of the series, The Birds, The Bees, & The Monkees.

Sadly, Davy passed away in February 2012 of a heart attack.

Peter Tork – Born in Washington DC in February 1942, Peter was the oldest of the four. Tork wound up playing the “straight man” of the group, and would often be setting up the jokes rather than making them himself. His father was a college professor, and Peter himself has always been a bit of an intellectual.

He started playing piano at age nine, and went on to learn several other instruments. While he was a young man, Peter befriended then aspiring musician Stephen Stills, mostly known for Buffalo Springfield, and being the Stills in Crosby, Still, Nash, & Young. As luck would have it, Stills had auditioned to be a Monkee before Peter knew about the opportunity. Stills was rejected due to not being photogenic enough for TV. Stills then recommended the creators look at Peter Tork. “And the rest” Tork would say “is a hysterectomy”

In a bit of irony, Tork may have been the one with the greatest amount of musical talent. Yet onscreen he was cast as being a bass player. Plus, his role in the show was more of a straight man who could be fooled, despite being a real life intellectual.

Tork is probabably the one that sang the least often. In fact, only one Monkees song from the original run featured Peter on lead vocals. That being “Your Auntie Grizelda” off the second album More Of The Monkees.

That said, it’s worth noting that Peter did help write a few songs. Most notably “For Pete’s Sake” which became the closing theme music., though it’s commonly misidentified as “In This Generation”. He also did the music arrangement for arguably their biggest hit, “Daydream Believer”.

Michael Nesmith – Born on December 1942 in Texas, Nesmith is a bonafide  southerner. Though cast as a quieter goofball,  he often wound up being the smartest guy in the room.

Nesmith had recorded songs previously under the name Michael Blessing, and had experience writing songs. One of his songs was “Different Drum”, which became a hit for The Stone Poneys that launched the career of a young Linda Ronstadt.

Mike’s onscreen gimmick was his constant wearing of a snowcap. He wore the cap during his audition, and the producers liked the look. In reality, Mike truly grew to hate the snowcap look. He and Peter Tork were also the ones most vocal about wanting to play their own instruments

After The Monkees, Nesmith became quite the renaissance man. He started a video company that produced movies and comedy videos like Elephant Parts. In 1980, he started a TV show called PopClips, which would wind up being the direct precursor to MTV. On top of that, his mother had created the solution that would become Liquid Paper.

Among some of the Hollywood films Nesmith produced are Repo Man and Timerider.

Nesmith’s song “Papa Gene’s Blues” was one of the rare exceptions on the first album to be written and produced by a band member.

It is true is the band did not play instruments on the first two albums, The Monkees and More Of The Monkees. The reasons why were simple. One, they were doing the TV show, and for productions’ sake, they could just go into the studio and lay down vocals rather than spend the extra time rehearsing. And two, the songs needed to sound like a band that had been together for years. And guys that just met each other the same year just flat out aren’t going to be in sync, let alone do much songwriting.

The onscreen depiction of the band had Mike on guitar, Micky on drums, and Peter Tork on bass. The irony is Peter Tork may have been the most musically inclined of all of them. Davy was usually depicted as percussion (tamborine or maracas), but he did play instruments here and there. Micky did have to learn drums, as he was more of a guitarist. Davy had told the story that when they were asked who is going to be the drummer, he, Mike, and Peter all took a step back leaving Micky alone”.

Communication about when the albums would be released and what singles would be used was not discussed much between the label and the band. There was an infamous story of The Monkees doing live appearances shortly after the first album was released. Fans would tell them “We got your new album”… to which confused the group as they only knew of one album. It turned out the second album More Of The Monkees had been produced and released without their knowledge..

Most of the early hits were mostly written by other songwriters

Some critics do not seem to consider The Monkees a “real band”, due to them being assembled. But the truth is that type of practice was not uncommon at all in the entertainment business. Studios have assembled singing groups for decades, and it’s still being done to this day. How were The Spice Girls formed? The Backstreet Boys? New Kids On The Block?

The third album, Headquarters, was the first to feature the band playing their own instruments. It is looked at by many music historians as an important album in history due to this fact. By this time, Chip Douglas had been hired as producer. He also took over most of the bass playing. The album sold well, though subsequent albums sold significantly less than these first three.

The Monkees themselves had said if they could do it over again, the lineup would be Peter on guitar, Mike on bass, Davy on drums and Micky as a frontman. That would have played to all their strengths. The music video to the song “Words” depicts this lineup.

The show ran for two full seasons from September 1966 to March of 1968. The show did decline in the second season, due to the reaction that the boys weren’t really a band. In addition, there were creative differences. The band wanted to do more than just screwball comedy, and wanted to turn the show into more of a variety show. During that time, variety shows like The Ed Sullivan Show were extremely popular.

Some of the musicians who auditioned for the show did wind up with succesful music careers. There was the aforementioned Stephen Stills, as well as Paul Williams.

The group made their first and only feature film in 1968. Head was releaseed to change the band’s image. In fact, there was a marketing campaign that didn’t even mention the band was in the movie. The opening scene of the band jumping off the bridge was to symbolize the “death and rebirth” of their careers. Jack Nicholson (yes THAT Jack Nicholson) helped write and produce the film. The title Head came about because if there was a sequel, it would be marketed as “From the people that gave you Head”.

The movie is notable for having several different cameos. Among the celebrities who appear:

While Head may have been a colossal failure at the box office, it would up gaining cult status for its outlandishness. From a musical standpoint, it did feature a live rendition of the song “Circle Sky”, in which they sing and play every note in one take.

In closing, there is an opinion from many fans that The Monkees are worthy to be included in The Rock And Roll Hall Of Fame. Only time will tell if that opinion will become fact.

If you have any thoughts on The Monkees, whether it be the show, the music, or anything else, we’d love to hear them. Sound off below!