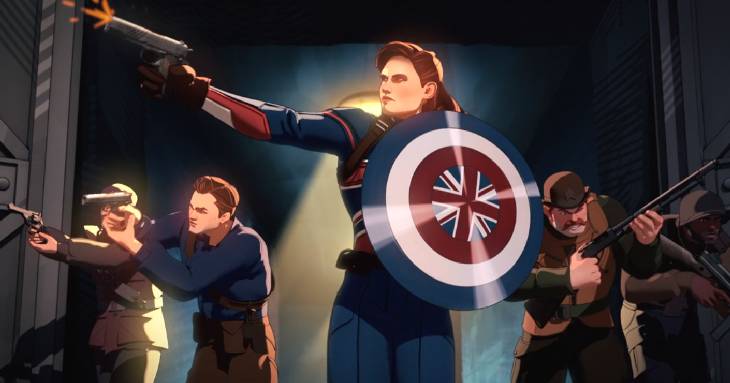 Marvel’s latest, and perhaps strangest, MCU entry is here! The animated anthology series What If…? made its premiere on Disney+ with its debut episode focusing on Hayley Atwell’s Peggy Carter. What If…? presents standalone stories depicting the Marvel Cinematic Universe if something else happened in the established canon than what was depicted in the films. The first episode shows what would have happened if the super-soldier experiment on Steve Rogers failed and he never became Captain America. Peggy Carter takes his place instead and becomes Captain Carter.

Most of the Captain America: The First Avenger cast returns, sans Chris Evans. Hayley Atwell reprises the role of Peggy Carter, as does Sebastian Stan as Bucky and Dominic Cooper as Harold Stark. While Chris Evans is not in the cast, voice actor Josh Keaton does a near spot-on impression, especially when he says “Brooklyn”.

The animation itself is impressive. In this day and age of 3D CGI, it’s nice to see a hybrid version that looks like a cross between modern 3D and traditional cel animation. Dare I say it looks a lot like a comic book in motion.

I know this is a “spoiler-free” review, but I think I can still say there is NO trademark post-credits scene. This is likely due to each episode being a standalone story. Though it has all but been confirmed that some of the situations shown throughout What If…? could carry over into the rest of the MCU since they are all parts of a multiverse.

This was a perfect series premiere. Not only is it a good introduction to the show’s concept, but it is also a good story in its own right. Plus seeing an action montage set to Benny Goodman should put a smile on anybody’s face. I’m assuming the rest of the episodes will dwell on situations that happened in other MCU films and not any stories carried over from the comics. So don’t expect Wolverine or Deadpool anytime soon.

One thought on “Marvel’s “What If…?” Episode One Spoiler Free Review”