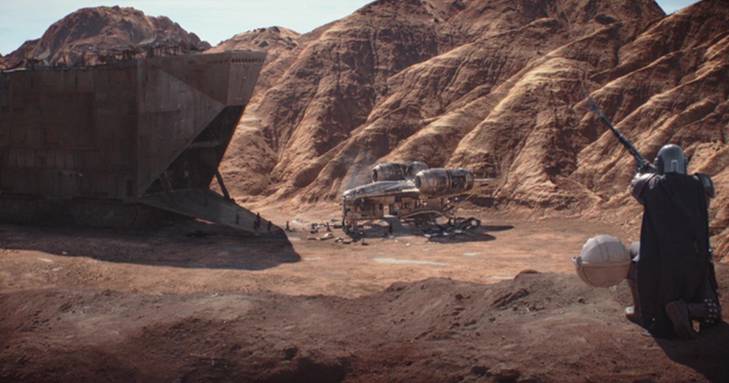 As everybody in this parsec knows, The Mandalorian is one of the flagship shows for Disney+. We gave a spoiler-free review last week, as well as an audio review with some spoilers on our last podcast episode. From now on, we will dip the reviews in Spoiler Sauce.

In the first episode, we met The Mandalorian, Greef, IG-11, Kuiil, and, of course, Baby Yoda. Mando (until further notice, he’ll just call him that) was originally hired to terminate the baby Yoda. However, he had second thoughts and actually blasted IG-11 when the droid tried to fulfill the bounty.

At the start of this episode, we find Mando taking Baby Yoda back to his ship, only to find it ransacked by Jawas. In a scene that looked like something out of a Super Nintendo game, Mando battled to the top of the sandcrawler, only to get stunned and left in the “Not-Tatooine” desert. The rest of the episode deals with Mando working with Kuiil to get his stolen material back from the Jawas by going on a quest for The Sacred Candy Egg.

The main character-building elements were in Mando’s relationship with The Child and Kuiil. While Mando is from a warrior race, he absolutely has honor. Kuiil is a bit of a loner by nature but goes out of his way to help those who earn his respect. These are elements that are timeless not only in Star Wars, but in many of the legends, fables, and myths of yore.

The other main plot point is Baby Yoda’s natural aptitude for The Force. It’s not clear yet whether The Child is 50 years old, or whether there were previous guardians who were 50, and were killed by the Nikto thugs during Chapter 1. But it’s a safe bet that question will be answered by the season’s end.

Somehow, The Mandalorian manages to keep all these elements without losing the Western mystique that it clearly takes inspiration from. Even the art shown in the closing credits draws vibes of 60s movie posters. This is a series that is keeping tradition while forging new grounds.