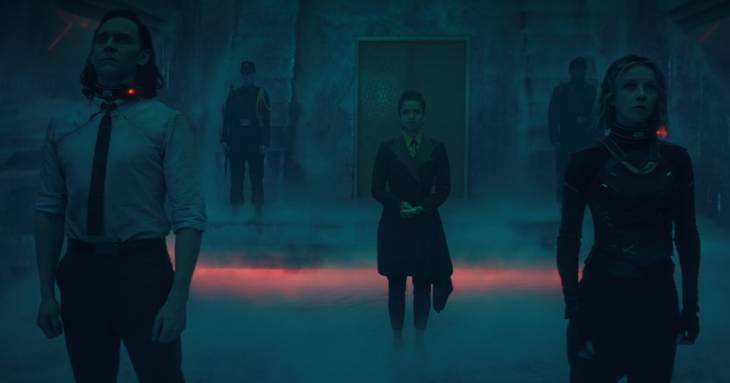 The TVA enters Asgard and apprehends a young Sylvie. Ravonna tries to bring her to trial but Sylvie stomps on her foot and escapes with a TemPad. We then see the current Ravonna standing before The Time Keepers.

Mobius talks to Ravonna after her meeting and pleads with her to speak with Hunter C-20 (the woman Sylvie kidnapped in the second episode). Ravonna tells Mobius that is impossible because she died due to her brains being scrambled by Sylvie’s spell.

Back on Lamentis Sylvie tells Loki her story about how she was born The Goddess Of Mischief and The TVA apprehended her at a young age. Her existence was a threat to the Sacred Timeline, so her history was erased. She has spent the rest of her life running because every place she goes creates another nexus event. She laments that she’s grown up n apocalypses and now she will die in one. However, A pair of time doors appear just in time and the two are brought back to the TVA.

Mobius brings Loki to another time door. Loki, possibly suspecting death, warns Mobus that the TVA is lying to him. Mobius blows off this accusation and has him tossed through the door… and into Asgard. Loki sees Sif, who immediately berates him and punches him. Then, a few moments later, Sif reappears and punches him again in the same fashion. Loki quickly realizes he’s stuck in a time loop.

Mobius meets with Loki, who refuses to talk about Sylvie. It isn’t until Mobius threatens to throw him back in the time loop that Loki relents. He then claims to have been manipulating Sylvie from the start, and when he’s done he will dispose of her. Mobius responds by telling him that won’t be necessary since she has already been killed. Loki is shocked by this, which prompts Mobius to mock him for having romantic feelings for his own variant.

After realizing he’s been tricked, Loki pleads to Mobius that everybody in the TVA is a variant taken by the Time Keepers and brainwashed. Mobius doesn’t believe him, tosses him into another time door, and meets with Ravonna to close the case.

Ravonna and Mobius talk about closing the case. Mobius again asks about C20 and how she deteriorated so fast. Ravonna blames it on Sylvie’s power. Morbius, hiding his suspicions, asks her what she will do with her new trophy, Sylvie’s sword. She takes the sword and mounts it on her bookcase. While she has her back turned he swaps his own TemPad with hers.

Elsewhere, Hunter B-15 takes Sylvie to the Roxxcart mall, She asks her why she has visions that she doesn’t recall. Sylvie explains that she cannot create any memories, she can only access ones that already exist. She tells her that those are actual memories erased by The Time Keepers.

Mobius opens Ravonna’s TemPad and finds a video of C-20 saying she has memories of places she would go to with her friends. She makes the same accusation that everybody in the TVA is a variant. At that point, Ravonna is seen ending the recording. Realizing the truth, Mobius decides to meet with Loki again.

Loki and Mobius leave the time cell but are met by Ravonna and several guards. At first, Mobius plays dumb to no avail. He then tells Ravonna that he wishes to be taken to wherever he was before the TVA took him. Ravonna has Mobius pruned and he is zapped into thin air. She then takes Loki and Sylvie to meet with the Time Keepers.

Loki and Sylvie stand over their fallen enemies. Loki seemingly is about to tell Sylvie that he loves her. But right when he’s about to do so he is pruned from behind by Ravonna herself.

After the closing credits, we got our first post-credits sequence for the series. Loki awakens and finds himself laying on the ground. He asks “Am I dead?”. He hears “Not yet. But you will be unless you come with us”. Loki looks up to see three other presumably variants. An old man in classic Loki getup, a bearded black man wielding a hammer, and a boy with an alligator. Truly a “WTF” moment.

There was a lot to look at in this episode. Loki really is getting put in a sympathetic light, but I can’t help but think that Loki still has something devious up his sleeve. My hunch is Mobius is alive and the one that got pruned was an illusion or a clone. Since this is all setting up Doctor Strange in the Multiverse of Madness we could get a glimpse of Baron Mordo. I also couldn’t help but notice that one of the Time Keepers looked an awful lot like Kang. That said, I think we were all expecting that anyway. As for the hinted romance between Loki and Sylvie, could variations of the same being be compatible as mates? At the very least it would be VERY weird. Then again, the only person Loki could ever love would be himself…